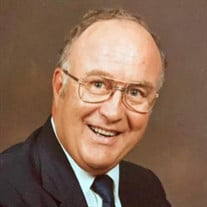 A. Dale Bjorklund died at his home in Manteno, Illinois, April 4, 2020, at age 89. Though his death was unexpected, Dale was ready at any time to go to his heavenly Father. Alfred “Dale” Bjorklund was born March 9, 1931, in Minneapolis, Minnesota, to Alfred J. and Agnes C. (Myhre) Bjorklund. Dale attended school in Minneapolis, graduating from Roosevelt High School in 1949. Throughout his school days he participated in many sports, including football, wrestling, baseball, swimming, skating, and snow skiing. He also enjoyed camping, and spent summers working as a camp counselor and waterfront director. These activities led to his interest in physical education and coaching. He earned a double major in Physical Education and Recreation at the University of Wisconsin, LaCrosse, in 1953. Dale played football at LaCrosse and was named All-Conference Center both his junior and senior years. He earned a Master of Arts in Education/Administration at the University of Michigan at Ann Arbor. Dale began his 30-year career at Homewood-Flossmoor (H-F) High School, Flossmoor, IL, in 1959, as head football coach and physical education instructor. From 1963-1974, he was the Athletic Director at H-F. During this time, he also served as vice-president and president of the Illinois High School Athletic Directors Association. Prior to retiring in 1989, Dale enjoyed his final years teaching Adaptive P.E. He was proud to say he spent 50 consecutive years with football as a player, coach, athletic administrator, and finally, as a volunteer special team kicking coach at Olivet Nazarene University. As a son, brother, husband, father, grandfather, friend, teacher, and coach, he touched many lives throughout his 89 years. Dale was preceded in death by his wife, Margaret; son, Wayne; brother, Doug; and his parents. He is survived by his children Dianne (Paul) Eggen, Randy (Jill) Bjorklund, Nancy Bjorklund; step-children Brian (Kelly) St. Aubin and Michele McAley; grandchildren Ryan (Laura), Justin, Jonathan (Britany), Jack (Makenzie), Reid, Jaden, Zachary, Hannah, Chloe, and Drew; and great-grandchildren Olivia and Brooks. This celebration of Dale’s life was delayed so more friends and family could be together. A memorial service will be held at 10 a.m. Saturday, September 11, 2021 at Manteno Church of the Nazarene. Refreshments and social time will follow after the service. For the well-being and comfort level of all, the family respectfully asks that masks be worn. Private inurnment will be held at Kankakee Memorial Gardens in Aroma Township. The funeral service will be live streamed. Please visit our website for the link. Memorials may be made to Homewood-Flossmoor High School Foundation, Manteno Church of the Nazarene, or a charity of your choice. Arrangements by Clancy-Gernon Funeral Home in Manteno. The link on youtube will be https://youtu.be/zh8vwDFxatA for the service.

The family of A. Dale Bjorklund created this Life Tributes page to make it easy to share your memories.

A. Dale Bjorklund died at his home in Manteno, Illinois, April...