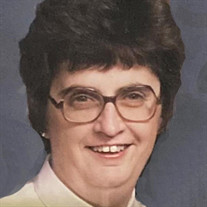 Alice T. Anderson, age 78, of Bourbonnais passed away Thursday, July 15, 2021 at Citadel of Bourbonnais. She was born April 24, 1943 in Kankakee, the daughter of Lionel & Cleo (Drazy) Fortin. She married Donald G. Anderson on December 6, 1975 at Wesley United Methodist Church in Bradley. Alice was a retired employee of CIGNA. She was a member of the Bourbonnais V.F.W Auxillary. She was active in the Bradley Bourbonnais Sportsman’s Club and Women of the Moose Sr. Regent. Alice enjoyed crocheting and cross stitch. She was a member of Grace United Methodist Church. Surviving are her husband, Donald G. Anderson of Bourbonnais; one son, Don Anderson of Watseka; one daughter and son-in-law, Denise & Kevin Coffey of Pontiac; six grandchildren, Josh (Amber) Coffey, Annette (Andrew) Heisner, Matt (Becky) Coffey, Hayden Anderson, Brody Anderson, Bristol Anderson; three great-grandchildren, Lyndon, Layton, and Liam; and one sister, Mary BeDell of Bourbonnais. Alice is preceded in death by her parents; one brother Joe Fortin; and one granddaughter, Maggie Anderson. Visitation will be held from 10 a.m. until the time of the 11 a.m. funeral service on Wednesday, July 21, 2021 at Clancy-Gernon Funeral Home in Bourbonnais. Rev. Stephen Hudspath will officiate the service. Burial will follow at Kankakee Memorial Gardens in Aroma Township. Memorials may be made to Uplifted Care, Citadel of Bourbonnais, or Grace United Methodist Church.

The family of Alice T. Anderson created this Life Tributes page to make it easy to share your memories.