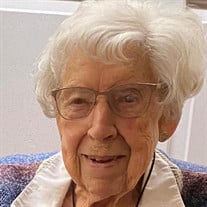 Lieutenant Colonel Alvera Hamlyn AMSC-PT of Kankakee passed away Thursday, December 9, 2021. She was born February 4, 1923 in Dwight, the daughter of Edgar & Bessie (Kime) Hamlyn. Alvera received her bachelor’s degree from the University of Illinois and completed the Army Physical Therapy course at Percy Jones General Hospital. In 1957, she received her master’s degree in Physical Therapy from New York University She was assigned to the Philippine Scout Hospital in Manila when the islands were granted their independence in July of 1946. She returned to the Far East 1950-1953 when she was assigned to the 343rd General Hospital in Japan and was later transferred to Tokyo Army Hospital where most of the United Nations Troops were treated. Alvera then went to Walter Reed Army Hospital where she supervised the clinic of Army Physical Therapy students. After New York University, she was assigned to the Medical Personal Procurement at the 2nd Army where she visited many of the colleges that offered courses that qualified them for the Army programs. After a brief time at Fort Hood, Texas, as Chief Physical Therapy Section, she was sent to the Tripler Army Hospital in Hawaii in the same role as well as ending her career at Madigan Army Hospital. Upon her retirement from the Army in 1968, she was awarded “The Legion of Merit” for exceptionally meritorious performance as Chief Physical Therapist at Tripler Army Hospital (1962-1965) and Madigan Army Hospital (1965-1968). Alvera retired to San Antonio, Texas where she enjoyed family visits, golf, tennis, and dinner parties with other military retirees when she wasn’t traveling the world with other friends and family. In 2006, she moved back to Illinois to be near family. She resided at Riverside Senior Life Facilities and remained active in the area. The influence and impact her life had on family was truly a blessing and we look forward to a joyful reunion in Heaven. Surviving are one brother and sister-in-law, Vernon (Swede) & Betty Hamlyn of Bourbonnais; one sister and brother-in-law, Pamela & Gary Blanchette of AZ; seven nephews; two nieces; and several great nieces and great nephews. Alvera was preceded in death by her parents; one brother & sister-in-law, Edgar A. & Alice Hamlyn; and infant brother, Charles Hamlyn. Cremation rites have been accorded. As per her wishes, no services will be held. Memorials may be made to the BBCHS Best Buddies Club. Arrangements by Clancy-Gernon Funeral Home in Bourbonnais.

The family of Alvera Hamlyn created this Life Tributes page to make it easy to share your memories.