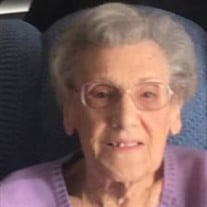 Anna Mary Einfeldt, 96, of Bradley, IL, passed away comfortably at home surrounded by loved ones on October 16th, 2021. Anna was a devout Catholic who had a deep and abiding love for her family and friends. She always had a smile and a good word for people of all walks of life. She readily gave her time, and support to improve the lives of others. Anna was born on October 10th, 1925, to Joseph and Rosa (Dardi) Serafini in Kankakee, IL. After graduating from St. Joseph Seminary in Kankakee, Anna went on to work at the Joliet Arsenal during World War II. After the war, Anna was a homemaker and after raising her family worked at the Shapiro Developmental Center until she retired in 1986. On December 26, 1943, Anna married the love of her life, Frank Einfeldt, at St. Rose Parish in Kankakee. Anna and Frank had five children together: Pamela (Ronald) Gean of New Lenox, IL, Michael (Sandra) Einfeldt of Bellevue, WA, Craig Einfeldt of Bradley, Stephen (Cathy) Einfeldt of Bourbonnais, and Mary (Kenneth) Jones of Scottsdale, AZ. Anna was an active and founding member of St. Martin's Church where she was a Eucharistic Minister and Sacristan. In 1998, the St. Martin's Council of Women awarded her Woman of the Year. She was also a member of the Sons of Italy. Anna was dedicated to helping others by delivering Meals on Wheels, and spending as much time as she could with family and friends. As a couple, Anna and Frank were avid world travelers. Anna is survived by her 5 children, 11 grandchildren, and 17 great-grandchildren. Anna is preceded in death by her parents; her husband; and three brothers, Angelo, Roger, and William Serafini. Visitation will be held from 5:00 p.m. to 7:00 pm on Tuesday, October 19, 2021, at Clancy-Gernon Funeral Home, Bourbonnais. Funeral Mass will be held at 10:00 a.m. Wednesday, October 20, 2021, at St. John Paul II, West Campus. Burial will follow at Mt. Calvary Cemetery, Kankakee. Memorials may be made to Uplifted Care or St. John Paul II Catholic Church. Please sign her guestbook at www.clancygernon.com Arrangements are by Clancy-Gernon Funeral Homes, Bourbonnais.

Anna Mary Einfeldt, 96, of Bradley, IL, passed away comfortably at home surrounded by loved ones on October 16th, 2021. Anna was a devout Catholic who had a deep and abiding love for her family and friends. She always had a smile and a good... View Obituary & Service Information

The family of Anna Mary Einfeldt created this Life Tributes page to make it easy to share your memories.