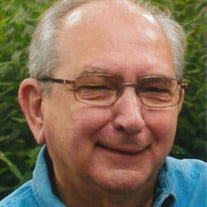 Arnold “Arnie” Joseph Joubert, age 76, of Kankakee passed away Sunday, January 16, 2022 at his home after a three and a half year illness. He was born May 19, 1945 in Bradley, the son of Roland & Alexine (Guenette) Joubert. He married Margaret Dionne on February 6, 1965 at St. Joseph Catholic Church in Bradley. Arnie was employed by Riverside Medical Center in Kankakee for 40 years as a Computer Operations Supervisor. He retired in January 2014. He was a member of the Knights of Columbus and the National Right to Life Association. Arnie was an active parishioner of St. John Paul II Catholic Church in Kankakee. Surviving are his wife of 56 years, Margaret Joubert of Kankakee; two daughters, Debra & Steve Marcotte of Bourbonnais and Angela & Matt Vitellaro of Tinley Park; one son, Brad & Lisa Joubert of Bargersville, IN; one sister, Marlene Maddie of Baton Rouge, LA; one brother, Ron & Kathy Joubert of Bourbonnais; one sister-in-law, Mary Joubert of Bourbonnais; and ten grandchildren, Nicholas Marion, Jenna Marion, Sam Marion, Rachel Marcotte, Phoebe Joubert, Wade Joubert, Anthony Vitellaro, Claire Vitellaro, and Aaron Vitellaro. Arnie is preceded in death by his parents, one brother, Medrick; one brother-in-law, Joseph Maddie; and one granddaughter, Sara Marion. Visitation will be held from 6-8 p.m. on Tuesday, January 25, 2022 at Clancy-Gernon-Hertz Funeral Home in Kankakee. A funeral Mass will be celebrated at 10 a.m. Wednesday, January 26, 2022 at St. John Paul II Catholic Church- West Campus. Interment will follow at St. George Cemetery. Memorials may be made to St. John Paul II Catholic Church.

The family of Arnold "Arnie" Joseph Joubert created this Life Tributes page to make it easy to share your memories.