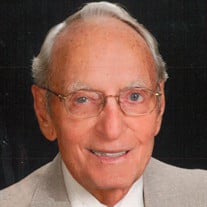 Arthur J. Kapchinske, 99, of Kankakee, passed away Friday (July 16, 2021) at his home. He was born Dec. 25, 1921, in Manteno, the son of Adolf and Natalia Pack Kapchinske. Arthur married Alice Jarvis on June 13, 1942, at St. Patrick’s Catholic Church in Momence. She preceded him in death March 1, 1995. Arthur retired from Commonwealth Edison where he had worked for 41 years. He was a 75-year member of the IBEW. He enjoyed golfing and played until he was 92 years old. Arthur served in the U.S. Army during World War II, serving in the European Theater, Normandy, Ardennes, Central Europe. He was a longtime member of St. John United Church of Christ. Surviving are sons, Jeffery Kapchinske, of Kankakee, and Charles Kapchinske, of St. Anne; daughters, Crystal Donohue, of Chicago, and Greta Siemsen, of Ft. Meyers, Fla.; six grandchildren, Beth Donohue, Daniel Donohue, Michael Donohue, Adam Kapchinske, Nicholas Kapchinske and Andrew Siemsen; eight great-grandchildren; along with several nieces and nephews. In addition to his wife, he was preceded in death by his parents; two brothers, Edwin, and his twin brother, Ralph; three sisters, Lydia, Lucia and Elsie; and two sons-in-law, Donald Donohue and Steve Siemsen. Visitation will be from 10 a.m. Wednesday, July 21, until the 11 a.m. funeral service at Clancy-Gernon-Hertz Funeral Home in Kankakee, with the Rev. Barbara Lorbach officiating. Burial will be in Kankakee Memorial Gardens Cemetery in Aroma Township. Memorials may be made to St. John United Church of Christ.

The family of Arthur J. Kapchinske created this Life Tributes page to make it easy to share your memories.