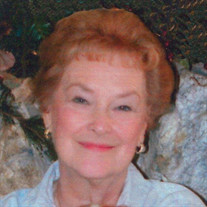 Barbara Azzarelli August 26, 1927 – December 22, 2020 Kankakee – Barbara J. Azzarelli, 93, passed away peacefully on December 22, 2020 at her Florida home, surrounded by many of her children and grandchildren. Barbara was born August 26, 1927, in Jackson, Michigan, the daughter of Ambrose and Mabel Brown. She met the love of her life, Joseph I. Azzarelli, while on a train bound from Chicago to Jackson. The entire trip, her younger sister, Eleanor, repeated that their mom had said not to talk to strangers, but Barbara never met a stranger. Happily, she married Joseph in Jackson, Michigan on May 6, 1950. They were married almost 52 years when he passed away on April 24, 2002. She was also preceded in death by her parents; her daughter, Nora Van Hook; her brother, Donald Brown; and her sister, Eleanor Bartholomew. Surviving are the most grateful children in the world, Patricia (Michael) Lynch, Nancy (Michael) Delgado, Joseph (Dianne) Azzarelli, Jayne Korstick, Barbara Lynn (Jerry) Zielinski; her remaining sister-in-law, Betty (John) Azzarelli; as well as 16 grandchildren; many great-grandchildren; and her beloved Cavalier, Teddy. The first half of Barbara’s married life was devoted to her children and husband, with occasional time spent bowling, golfing, and entertaining friends as well as Joseph’s many business associates. All of this while fighting breast cancer twice in her 40’s. She was often referred to as the “white tornado” by Joe – referring to the speed at which she was always moving. With 6 children and one rather demanding Italian, she knew no other way to get it all done. After raising her children, she enjoyed time with her girlfriends playing bridge, traveling, and watching golf, as opposed to playing. (You could never expect to talk to her during the Masters!) Along with this, she greatly loved time with her grandchildren and attended as many birthday parties and sporting/school events as possible. When she reached her 80’s she didn’t stop. She found two new hobbies, puzzling and quilting. As with golf, if you Facetimed her while working on a puzzle, you could expect the phone to be laid down mid-conversation while she continued her search for another piece. And after learning to quilt from her sister, Eleanor, she and her daughter Jayne worked together on more quilts than can be remembered. If you were a lucky recipient of one, you have a very treasured item as she put nothing but love into everything she made. And while her friends, (you ladies know who you are), were such an important part of her final years, Barbara considered her greatest legacy to be her family. She loved each child, grandchild, step-grandchild, great-grandchild, in-law and out-law, unconditionally. She instilled in all of them the joy of loving and caring for others, which she again demonstrated on the final night of her life while explaining that it would take a few days for her to be cremated, so everyone should go home and celebrate Christmas with their families. Even on the final day of her life, she continued to do what she always did, care for others, especially her family. A memorial visitation will be held from 9 a.m. until the time of the 10 a.m. funeral Mass on Saturday, May 8, 2021 at St. John Paul II- East Campus, formerly St. Teresa Catholic Church. Arrangements by Clancy-Gernon Funeral Home, Bourbonnais. Memorials may be made to the Azzarelli Clinic.

The family of Barbara J. Azzarelli created this Life Tributes page to make it easy to share your memories.