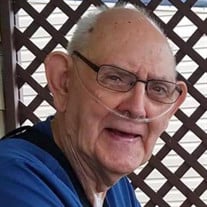 Beauford L. “Radar” Breckenridge, age 83, of Kankakee passed away Wednesday, November 3, 2021 at AMITA St. Mary’s Hospital in Kankakee. He was born May 20, 1938 in Sebeka, MN, the son of Lloyd & Luella (Fernandez) Breckenridge. Radar married Margaret Bass on November 10, 1962 in Aroma Park. Radar was an Upholsterer. He enjoyed fishing, the outdoors, and playing games on Facebook. He was an avid Chicago Cubs and Chicago Bears fan. He like working with his hands. Surviving are his wife, Margaret Breckenridge of Kankakee; three sons, Beauford L. Jr. (June) Breckenridge of Kankakee, Rodney (Lori) Breckenridge of Channahon, and Richard (Vanessa) Breckenridge of Spring, TX; one daughter, Dawn (William) Talley of Marseilles; two sisters, Gail and Lori; three brothers, James (Linda) Fernandez of FL, Scott, and Troy; seven grandchildren; four great-grandchildren; step-mother, Donna; and a large extended family. Beauford was preceded in death by his parents; one son, John Breckenridge; two brothers, Lloyd Breckenridge and Lyle Breckenridge; and one sister, Cheryl Breckenridge. Cremation rites have been accorded. A memorial visitation will be held from 1 p.m. until the time of the 3 p.m. memorial service on Friday, November 12, 2021 at Clancy-Gernon- Hertz Funeral Home in Kankakee. Memorials may be made to the family wishes.

The family of Beauford L. "Radar" Breckenridge created this Life Tributes page to make it easy to share your memories.