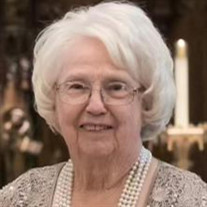 Betty Mae Gerard died fortified by the last sacraments of the Catholic Church on March 17, 2022. A wake will be held from 3 to 6 p.m. at Clancy-Gernon-Hertz Funeral Home in Kankakee on Monday, March 21, 2022 concluding with the Rosary. A Mass of Christian Burial will be celebrated by Most Reverend Joseph N. Perry, Auxiliary Bishop of Chicago, at 10:30 a.m. on Tuesday, March 22, 2022 at St. Rose of Lima Chapel, Kankakee, followed by burial at Mount Calvary Cemetery. The former Betty Mae Robbins was born near Clifton, Iroquois County, on January 5, 1941, the sixth of 16 children born to Joseph C. Robbins and Letha M. Dwyer. In addition to her parents, Mrs. Gerard was predeceased by two sisters and five brothers. Mrs. Gerard was a devoted wife, mother and grandmother — loving, faithful, selfless and generous. Mrs. Gerard began a career with local movie theaters while in high school, at the Luna theater, and eventually managed the Town Cinema, Paramount and Meadowview theaters. She was always ready and eager to lend a helping hand, especially at the former St. Teresa School, when it was attended by her children, including stints as a girls basketball coach and Cub Scouts den mother. She had also served Father Scaria Thoppil, C.M.I. as a housekeeper at St. Rose Rectory. Her home cooking was treasured by her family, especially her fried chicken and pies. The late Cardinal Francis E. George, O.M.I. once said, “The only thing we take with us when we die is what we have given away.” We know that Betty took with her a great deal when the Lord called her to himself. Although Betty’s sufferings in life were many, she always placed others before herself. Betty led her life with a servant’s heart. While her entire family experienced her love and care, she was especially dedicated to her mother-in-law Mrs. Sarah Gerard, longtime neighbor Miss Mary Taylor, and her grandsons. Mrs. Gerard graduated from Kankakee High School in 1959. She was baptized on May 7, 1960 at the former Immaculate Conception Church in Kankakee. There, on June, 11, 1960, she was united in matrimony to John E. Gerard, who preceded her in death on July 6, 2021. The couple had four children: Robin E. Gerard (deceased), David J. Gerard of Kankakee, Debra A. (Robert) Heinlein of Crown Point, Ind. and John M. (Cindy) Gerard of Fort Myers, Fla. Mrs. Gerard is also survived by two grandsons: Michael R. (Gretchen) Heinlein of Fort Wayne, Ind., and John E. Gerard of Fort Myers, Fla.; three great-grandchildren: Joseph G. Heinlein and Anne T. Heinlein of Fort Wayne, Ind, and a baby due in May.; 6 sisters: Joan Mullen of Hideaway, Texas, Millie Blanchette and Margie Tofte Bourbonnais, Barbara Giardina of Bradley, Letha Hamilton of Buckley and Brenda Weiss of Donovan; 2 brothers: Gerald Robbins of Bourbonnais and Maurice Robbins of Channahon; many nieces and nephews and former colleagues and friends. Memorials may be made for the celebration of Masses for the repose of her soul. May she rest in the peace of Christ. Please pray for her.

Betty Mae Gerard died fortified by the last sacraments of the Catholic Church on March 17, 2022. A wake will be held from 3 to 6 p.m. at Clancy-Gernon-Hertz Funeral Home in Kankakee on Monday, March 21, 2022 concluding with the Rosary. A Mass... View Obituary & Service Information

The family of Betty Mae Gerard created this Life Tributes page to make it easy to share your memories.

Betty Mae Gerard died fortified by the last sacraments of the...