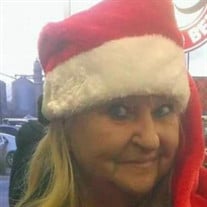 Brenda G. Donovan, age 72, of St. Anne passed away Wednesday, December 15, 2021 at her home. She was born November 25, 1949 in New Hope, AL, the daughter of Doyal & Opal (Hornsby) Hyatt. Brenda married Thomas J. Donovan. He preceded her in death in 2006. Brenda was a social worker. She was a jokester and had a very outgoing personality. Brenda liked riding her custom trike. She was very caring and giving. She passed down her sarcasm to her children. Surviving are two daughters and two sons-in-law, Lisa & Aaron Gorzela of Papineau and Mistey & Chris Moore of St. Anne; nine grandchildren, Amy (Ziggy), Andrea (Chris), Aaron (Jackie), Kimberly, Brande, and Christey; nine great-grandchildren, Amber, Joshua, Nathan, Alayna, Lilliana, Logan, Vincent, Ziggy, and Nicholas; and her fiancé, Terry Waugh. In addition to her husband, Brenda was preceded in death by her son, Thomas A. Donovan. Cremation rites have been accorded. There will be no public services. Arrangements by Clancy-Gernon-Houk Funeral Home in St. Anne.

The family of Brenda G. Donovan created this Life Tributes page to make it easy to share your memories.