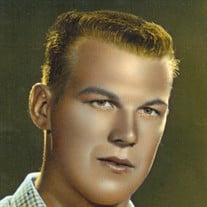 Chester “Chet” (Chettie) Robert Wall, age 79, of Manteno, passed away Wednesday, January 13, 2021 at Riverside Medical Center, Kankakee. He was born March 17, 1941, in Laona, Wisconsin, son of Anthony (Tony) and Nathlie (Pierwola) Wall. Chet married Patricia Garber on February 11, 1961 at the 5th Army Chapel in Chicago. Chet worked in the Government Defense Department in Washington, D.C., and the TTX Railroad. He was a twelve-year military veteran serving in the United States Army. Chet was a member of the American Legion. Chet was a bowler, winning many bowling tournaments, and coaching Junior Bowlers. He played fast pitch softball in the position of catcher. Chet enjoyed golfing. He was an avid Green Bay Packer fan. Chet was of the Catholic faith. Surviving are his wife, Patricia, one son, Steven Wall and daughter-in-law Michelle Gallant-Wall of Leonardtown, Maryland; one daughter, Julie Ann Wall and significant other, Chris Kloeckner of Essex; two sisters and brothers-in-law, Maryann (Ron) Stammer of Downers Grove, Vernie (Bruce) Wilczysnski of Cresthill; four grandchildren, Spencer Wall, Logan Wall, Gracie Barbush, Oliva Barbush; and one niece, Dawn (Michael) Gournis of Elmhurst. Chet is preceded in death by his parents and one son, Robert. According to Pat, “The Love of my Life was a great husband, father and grandpa.” “He was always there when you were in need no matter what time of the day. He never retired and worked until the day of his illness. We hope you are resting now in Heaven with the Lord and will be watching the Green Bay Packer game.” Private family inurnment will be held at Abraham Lincoln National Cemetery, Elwood. In lieu of flowers, memorials may be made to St. Jude’s Children’s Hospital. Arrangements are by Clancy-Gernon Funeral Home, Bourbonnais.

The family of Chester "Chet" Robert Wall created this Life Tributes page to make it easy to share your memories.