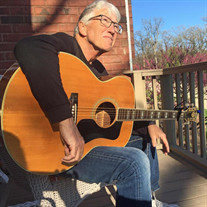 Clyde B. Richardson, age 70, of Bourbonnais, passed away Wednesday, March 23, 2022 at Riverside Medical Center in Kankakee. Clyde was born in July 1951 on the Southside of Chicago. A Vietnam Veteran, he proudly served his country in the Marines. A lifelong musician, he shared his love of music with all, professionally and personally. His infectious smile and friendly demeanor left lasting impressions on even those who met him briefly. Clyde was always ready with a joke or story from his illustrious life to share with anyone lucky enough to listen. His family and friends were always his first priority, and would selflessly go far out of his way for strangers and family alike. He was known as a second father to many of his children’s friends. A love story for the ages, Clyde's love and devotion for his wife of 45 years has served as inspiration to others. They enjoyed traveling together and made lifelong friends along their journeys. Clyde was an avid golfer and swimmer, finding joy on the links and in the pool. He was happiest entertaining at his family home, famously opening the pool season with his signature back flip to the cheers of his treasured grandchildren. A respected member of his personal, professional and musical communities, Clyde would share his passions with anyone within ear shot. Through his passion for music and his giving nature, he nurtured many musical careers. Clyde was deeply spiritual and shared a quiet respect with every soul he met. He passed peacefully in the early morning, surrounded by his wife and children. It was always his fashion to arrive early, even in death he was first to the fight. Clyde was loved by many and will be missed deeply and remembered fondly by those whose lives he touched. He was a parishioner of Maternity B.V.M. Catholic Church. Surviving are his wife, Diane Richardson of Bourbonnais; children, Lindsay & Cameron Bigler of Savoy, William Richardson of Bourbonnais, Jayme & John Curby of Kankakee, Chris Heer of WI and Brian Heer of Lisle; four grandchildren, Madeleine Bigler, Marshall Bigler, Skylar Curby, and Brady Curby; and a large extended family. Visitation will be held 2:00 p.m. – 6:00 p.m. on Sunday, March 27, 2022 at Clancy-Gernon Funeral Home in Bourbonnais. Funeral Mass will be celebrated at 11:00 a.m. on Monday, March 28, 2022 at Maternity B.V.M. Catholic Church in Bourbonnais. Interment will follow at Abraham Lincoln National Cemetery in Elwood. In lieu of flowers, memorials may be made to St. Jude Children’s Research Hospital.

Clyde B. Richardson, age 70, of Bourbonnais, passed away Wednesday, March 23, 2022 at Riverside Medical Center in Kankakee. Clyde was born in July 1951 on the Southside of Chicago. A Vietnam Veteran, he proudly served his country in the Marines.... View Obituary & Service Information

The family of Clyde B. Richardson created this Life Tributes page to make it easy to share your memories.

Clyde B. Richardson, age 70, of Bourbonnais, passed away Wednesday,...