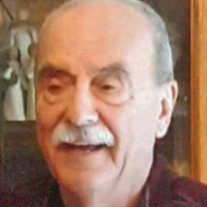 Dale Roger Varboncoeur, age 75, of Herscher, passed away Monday, November 8, 2021 at Riverside Medical Center in Kankakee. He was born May 21, 1946 in Beaverville, the son of Vernal & Josaline Martell Varboncoeur. Dale married Nancy Imhauser on August 21, 1971 at St. Rose of Lima Catholic Church in Kankakee. Dale received a Bachelor degree from Eastern Illinois University and a teaching degree from Rockford. He taught in School District 111 for one year and sub-taught in Manteno and Herscher. His hobbies included computers and traveling by train and car. Dale loved to coach football and attended all the football games. He enjoyed playing with his grandchildren. Dale was a veteran of the U.S. Army, having served in the USA Berlin Brigade. He was honorably discharged on February 1, 1970. Surviving are his wife, Nancy Varboncoeur of Herscher; one son, Alan Varboncoeur of Burlington, WI; one daughter and daughter-in-law, Ashley & Amy of Portland, OR; three grandchildren, Charlotte, Derek, and Nathan Varboncoeur; one sister, Ritta Curwick of Watseka; one brother, Richard Varboncoeur of Watseka; and many nieces and nephews. Dale is preceded in death by his parents; one sister and brother-in-law, Clara & Bruno Foester; one sister-in-law, Judy Varboncoeur; one brother-in-law, Paul Curwick; one brother and sister-in-law, Bernie & Joyce Varboncoeur. Cremation rites have been accorded. A memorial visitation will be held from 9:00 a.m. until the 12:00 Noon memorial service on Friday, December 10, 2021 at Clancy-Gernon-Hertz Funeral Home in Kankakee. Rev. Ron Neitzke will officiate the service. Inurnment will follow at a later date. Memorials may be made for his grandchildren’s education.

The family of Dale Roger Varboncoeur created this Life Tributes page to make it easy to share your memories.