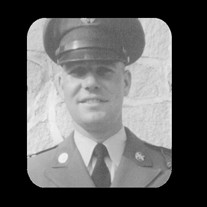 David A. Johnson, age 84, of Bourbonnais, passed away Sunday, August 22, 2021 at Riverside Medical Center in Kankakee. He was born November 19, 1936 in Superior, WI, the son of Roy. C. & Mable Rice Johnson. David married Beverly “Bev” Moyer on September 26, 1959 in Hayward, WI. He worked at Roper Assembly for 21 years. In 2002, David retired after 18 years of custodial/maintenance service from the Bourbonnais School District #53. He collected antique lamps and sports memorabilia. David served in the U.S. National Guard and served in the U.S. Army from 1959-1965. While in the Army, he played baseball. He was a member of the First Church of the Nazarene of Kankakee for over 60 years. Surviving are his wife of nearly 62 years, Beverly “Bev” Johnson of Bourbonnais; one son and daughter-in-law, Daryl & Kim Johnson of Bradley; two sisters, Clarice Thayer of Hayward, WI and Marjorie Bargo of Rapid City, SD; one brother, Everett & Lois Johnson of Bradley; three granddaughters; one step-granddaughter; three great-grandchildren; and several nieces, nephews, and cousins. David is preceded in death by his parents and one son, Troy Johnson. Cremation rites have been accorded. A memorial visitation will be held from 4:00 p.m. - 6:00 p.m. on Tuesday, August 31, 2021 at Clancy-Gernon Funeral Home, Bourbonnais, with a memorial service at 6:00 p.m. Rev. Cindi Schimmelpfenning will officiate. Inurnment will be held 10:00 a.m. Wednesday, September 1, 2021 at Abraham Lincoln National Cemetery in Elwood. Memorials may be made to Kankakee First Church of the Nazarene.

The family of David A. Johnson created this Life Tributes page to make it easy to share your memories.

David A. Johnson, age 84, of Bourbonnais, passed away Sunday,...