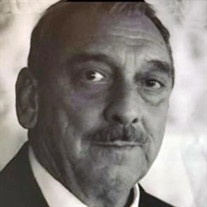 Dennis L. “Denny” Lottinville, age 81, of Bourbonnais embarked on his final journey Friday, January 14, 2022 at Central DuPage Hospital. He was born March 10, 1940 in Chicago, the son of Laverne “Ozzie” Lottinville & Marjorie "Margie" (Grandpre) Lottinville-Lowman. Denny married Kathleen “Kathi” Duncan on December 24,1975 in Kankakee. She preceded him in death on November 7, 2016. A veteran of the United States Navy, as a machinist he developed a love for working with tools. Denny started his own business "Have Hammer Will Travel" after 36 years with Pepsi-Cola. He enjoyed working with the community and sharing his expertise in a variety of handy man projects. Through his lifetime he wore many hats which include being a member of the Underwater Recovery team, volunteer fireman and a paramedic with Henson Ambulance. As the King of Dad jokes, he was the #1 fan in his own audience. Denny never met a stranger; he always tried to look past people's imperfections and see their potential. Denny enjoyed playing the piano, dancing the night away, vacationing with his wife and kids, casino therapy and had a deep devotion to his "Honey Club". A friend to animals, a lover of life, Denny thought each day should be filled with a smile, positivity and joy! As Denny would say. "Glad you got to meet me!" Surviving are four daughters, Sonia & Chris Larsen of Waxhaw, NC, Tammy & Jon Marcotte of Bourbonnais, Tess & Jeff Wilson of South Elgin, and Susan & Brian Landreth of Mexico, MO; three sons, Dennis “Deej” Lottinville of Bourbonnais, Michael & Becky Lottinville of Centralia, MO, and Pat & Linda Lottinville of Bourbonnais; two sisters, Jolinda Jones (James Griffin) and Janice Shenk, both of Kankakee; fourteen grandchildren; many great-grandchildren; numerous nieces and nephews and dear friend, Dale Allen. In addition to his wife, Kathi Lottinville, Denny is preceded in death by his parents. Visitation will be held from 2 p.m. until the time of the 6 p.m. funeral service on Friday, January 21, 2022 at Clancy-Gernon Funeral Home in Bourbonnais. Cremation rites will be accorded following the service. Inurnment will be held at a later date at Abraham Lincoln National Cemetery in Elwood. Memorials may be made to the family wishes or donor choice.

The family of Dennis L. "Denny" Lottinville created this Life Tributes page to make it easy to share your memories.