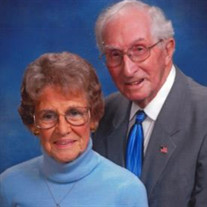 Dolores J. Ruder, age 95, of Bourbonnais, passed away Tuesday, May 10, 2022 at her home with her family by her side. She was born August 8, 1926 in St. George, the daughter of Lawrence & Nelda Bouchard Provost. Raymond C. Ruder, age 99, of Bourbonnais, passed away Wednesday, May 11, 2022 at his home surrounded by his family. He was born February 15, 1923 in Union Hill, the son of John & Anna Melinsky Ruder. Dolores and Raymond were united in marriage on November 20, 1948 at St. Patrick Catholic Church in Kankakee. Dolores had been a homemaker and also worked as a checker at Jewel for a number of years. She was a member of the St. Teresa CCW and Women of the Moose. She enjoyed golf league, cooking, traveling, and playing cards. Raymond had been a farmer, a mechanic, and worked as a maintenance supervisor. He enjoyed traveling and was an avid Chicago Cubs fan. He participated in the Honor Flight in Chicago. Raymond was a veteran of the U.S. Army Air Corps. He was also a member of the Moose. Dolores and Raymond were parishioners of St. Teresa Catholic Church and later at Maternity B.V.M. Catholic Church. Surviving are their children, Janet Blight of Medford, OR, Sue Kemp of Bourbonnais, Joyce Jackson of Bourbonnais, Judy & Randy Kella of Plantation, FL, Deb & Dan Hill of Marysville, OH, and Denise & Jeff Ripley of Wooster, OH; 13 grandchildren, Brooke Amash, Mandee Blight, Jennifer Blight, Ryan Kemp, Mason Kemp, Austin Kemp, Kelly Hernandez, Tyler Jackson, Jeremy Jackson, Lyle Jackson, Taylor Kella, Shawn Dubanski, and Michelle Wells; 17 great-grandchildren; Raymond’s sister-in-law, Monica Ruder of Herscher; and Dolores’ sister-in-law, Evelyn Provost of Bourbonnais. Dolores is preceded in death by her parents; three brothers, Donald & Viola Provost, Delmar Provost, Virgil & Lucille Provost; three sisters, Dorene & Lloyd Boone, Lois & Jerry Kirchman, and Lenore & Ray Langellier. Raymond is preceded in death by his parents; two brothers, Jack & Cecilia Ruder and Donald Ruder; and two sisters, Gertrude & Ed Kilbride and Bernadette Hayes. Visitation will be held 2:00 p.m. – 4:00 p.m. on Sunday, May 15, 2022 at Clancy-Gernon Funeral Home in Bourbonnais. Funeral Mass will be celebrated at 10:00 a.m. on Monday, May 16, 2022 at Maternity B.V.M. Catholic Church in Bourbonnais. Interment will follow at All Saints Cemetery in Bourbonnais. Memorials may be made to the family wishes.

Dolores J. Ruder, age 95, of Bourbonnais, passed away Tuesday, May 10, 2022 at her home with her family by her side. She was born August 8, 1926 in St. George, the daughter of Lawrence & Nelda Bouchard Provost. Raymond C. Ruder, age 99, of Bourbonnais,... View Obituary & Service Information

The family of Dolores and Raymond Ruder created this Life Tributes page to make it easy to share your memories.