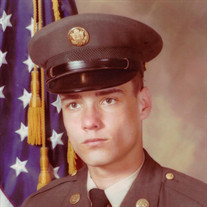 Donald Harry Cole Jr., age 63, passed away suddenly on Thursday, March 17, 2022 at Riverside Medical Center in Kankakee. He was born June 8, 1958 in Kankakee, the son of Donald Cole Sr. and Arlen (Lucas) Cole. Donald was the light of their life until his sister was born soon after and their family was complete. A very inquisitive boy he enjoyed the life he was given. Growing up he spent time doing everything that the Kankakee area had to offer. Hunting and fishing as a boy with his family he lived the "American Dream". After high school, Donald enlisted in the Army and served his country. Upon his return he met Mary Palmer and fell in love. The ensuing life would produce five children. Donald would go on to become a correctional officer for the Pontiac Correctional Center. He supported his family with this for years. Waking up before the sun and working long after. If wealth was measured by kindness than he would be the richest man to have ever lived. He was preceded in death by his father and mother. Surviving are his sister, Cynthia Miller of Fergus Falls, MN; his nephew, Charlie Miller of Perham, MN; his children, Michael Cole of Bourbonnais, Christopher and Tiffany Cole of Bourbonnais, Sharon Cole and Christopher McCorkle of Bourbonnais, Jennifer Cole and Jose Santos Bourbonnais, Jonnathan Cole and Danielle Kozlowski of Bradley; as well as grandchildren, Andrew Solis, Dylan Cole, Austin Cole, Jose Santos, Aydan Cole, Jayden Geisler, Joel Santos, Jesse Santos, Serenity McCorkle and Christopher McCorkle. Visitation for Donald will be from 4-6 p.m. on Wednesday, March 23, 2022 at Clancy-Gernon Funeral Home in Bourbonnais. Private inurnment will be held at a later date at Abraham Lincoln National Cemetery in Elwood.

Donald Harry Cole Jr., age 63, passed away suddenly on Thursday, March 17, 2022 at Riverside Medical Center in Kankakee. He was born June 8, 1958 in Kankakee, the son of Donald Cole Sr. and Arlen (Lucas) Cole. Donald was the light of their life... View Obituary & Service Information

The family of Donald H. Cole Jr. created this Life Tributes page to make it easy to share your memories.