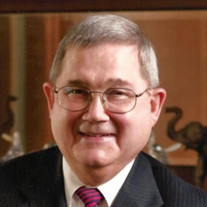 Donald E. Green, age 78, of Kankakee passed away on Sunday, January 31, 2021 at Riverside Medical Center in Kankakee. Don was born July 15, 1942 in Kankakee, the second of three sons of Joseph L. & Margaret (Andrews) Green. He married Kay McMullen on July 3, 1965. They had two children: Susan and Steven. Preceding him in death were his parents and one brother and sister-in-law, David & Donna (Skinner) Green. Don attended Kankakee public schools, graduating from Kankakee High School in 1960 where he was all conference center on the football team and active on the student council. In fact, it was while decorating for a high school dance that he met his future wife, Kay. After high school graduation, Don enrolled at Illinois State University, graduating in 1964 with a Bachelor of Science Degree in business and a minor in political science. Following his graduation from ISU, Don returned to Kankakee to enter the insurance business that was started by his grandfather, Fred “Brick” Andrews, and continued by his father, Joseph L. Green and his uncle Howard Andrews. That agency later merged with the Malmer agency to become Malmer, Andrews, and Green. Although he sold his shares in the agency in 1993 when he decided to run for Mayor of Kankakee, he remained active in the insurance industry, maintaining his broker’s license until his death. Combining his love of business with his strong interest in government, Don ran for and was elected to the Kankakee Community College Board of Trustees, where he served from 1978-1985. He resigned from the KCC Board when he was elected alderman of Kankakee’s third ward in 1985, a position he held for one term. In 1989, he joined a crowded field of candidates seeking to become the Republican nominee for Mayor of Kankakee. He lost that primary election but ran again for mayor in 1993. He was victorious that year and went on to service four terms as Kankakee Mayor from 1993-2009. Don considered serving as Mayor of Kankakee to be one of the highest honors of his life. He was by nature a problem-solver and strove to work cooperatively with the neighboring communities as well as with both political parties. He knew that that was the only way the area could prosper. There were many major successes during his 16 years in office, but he was especially proud of working with the City Council to institute what has become the area-wide bus system, of establishing a public-private partnership that resulted in a new and greatly improved Kankakee Public Library, and of ensuring that all seven wards of the city received equal treatment in the allocation of local tax dollars. Throughout his life, Don was active in a variety of community organizations. He served as president of the Kankakee Area Chamber of Commerce from 1982-1984 and was also president of the Kankakee Lions Club. Over the years, he also served on the Kankakee Public Library Board, the Area Jobs Development Association Board, the Mound Grove Cemetery Board of Directors, and various committees at Asbury United Methodist Church. He also chaired the Kankakee River Valley Metropolitan Agency from 1993-2017. He and his wife co-chaired the 2008 United Way annual fund drive. He also co-chaired the major gifts division of the 2012 and 2013 YMCA Healthy Kids Campaigns. Don also served on the People’s Bank Board of Directors from 1980 until his death. He considered that appointment to be one of the highest honors of his lifetime and was grateful to the Hammes family for giving him such a meaningful opportunity. Don was named the Rotary Club Distinguished Citizen of they Year in 1985, the Kankakee Area Chamber of Commerce Citizen of the Year in 1995, and along with his wife received the Journal Lifetime Achievement Award in 2008 and the St. Mary’s Servant Leader Award in 2009. Don was a devoted and loving husband and father. One of the things he most enjoyed doing with his family was boating, especially on lake Michigan during those warm, sunny days of summer. Until his fall in 2015, he also loved to cook, frequenting the local grocery stores on an almost daily basis and spending time at the Farmers’ Market, which was initiated during his tenure as mayor. Don is survived by his wife of 55 years, Kay Green of Kankakee; daughter Susan (James) Lopez of Kankakee, son, Steven Green of Spring Lake, MI; one brother, Richard (Marianne) Green of Crystal Lake; and special friend and daily helpmate, Jessica Andrade. Visitation will be held from 4-8 p.m. Friday, February 12, 2021 at Clancy-Gernon-Hertz Funeral Home in Kankakee. Due to the COVID 19 pandemic, face masks and social distancing will be required. A private family funeral service will be held. Cremation rites will be accorded following the services. Memorials may be made to the Kankakee Community College Foundation or to Asbury United Methodist Church in Kankakee.

The family of Donald E. Green created this Life Tributes page to make it easy to share your memories.