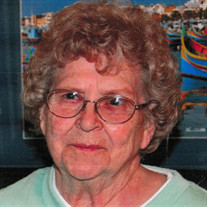 Edith S. Poland, age 90, of Limestone passed away Saturday, July 31, 2021 at Riverside Medical Center in Kankakee. She was born March 24, 1931 in Roanoke, the daughter of Issac W. & Susan F. (Onnen) Stortz. Edith married Darrell Poland on June 9, 1957 in Roanoke. He preceded her in death on March 6, 2007. Edith graduated from El Paso High School and from Illinois State University in Normal with her teaching degree. She taught in Long Point, Woodland and Hopedale High Schools. She became a homemaker after getting married to raise her two sons. Edith did home typing for Hogard’s Business Services. She loved watching her children’s and grandchildren’s school activities. Edith was a member of the Zion Lutheran Church in Bonfield. Surviving are two sons, Mark (Nancy) Poland of Limestone and Brian (Ray Liedtke) Poland of Hammond, IN; three grandchildren, Stephanie Poland of Aurora, Zachary (Anna) Poland of Spokane, WA, and Christopher Poland of Fishers, IN; one sister, Ethel Rose Stortz Flaa of Ottawa; one brother-in-law, Lyle (Carol) Poland of Decatur; and several nieces and nephews. In addition to her husband, Darrell Poland, Edith is preceded in death by her parents; her siblings, Bernice Stortz Audi, Victor Stortz, Florence Irene Stortz Melchin, and Beulah Stortz; and one brother-in-law and one sister-in-law, Norman Poland and Alice Helene Poland. Visitation will be held from 9 a.m. until the time of the 11 a.m. funeral service on Wednesday, August 4, 2021 at Zion Lutheran Church in Bonfield. Interment will follow at Kankakee Memorial Gardens in Aroma Township. Memorials may be made to the Zion Lutheran Church or family to donate to the charity of their choosing. Arrangements by Clancy-Gernon-Hertz Funeral Home in Kankakee.

The family of Edith S. Poland created this Life Tributes page to make it easy to share your memories.