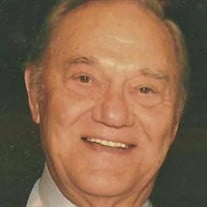 Edward C. Chiz, age 94, of Manteno passed away Sunday, August 15, 2021 at Bickford of Bourbonnais. He was born June 2, 1927 in Chicago, the son of Conrad P. & Marie (Elias) Chiz. Edward married Jeanette Schmiedl on September 30, 1950 in Chicago. She preceded him in death on June 28, 2021. Edward was a retired Broadview, IL policeman. He was a member of the F.O.P and the Illinois Police Association. He was very active in R.V. Travelers & Campers. Edward was a veteran of the United States Navy, having served during World War II. Surviving are one son and daughter-in-law, Dean E. & Sandra Chiz of Manteno; one daughter, Dawn Striz of Heiskell, TN; five grandchildren, Chad Striz, Jeremy (Jessica) Striz, Bradley (Lee Ann) Chiz, Scott Striz, and Corey (Cassandra) Chiz; and seven great-grandchildren, Sage, Pierce, Logan, Ethan, Skyler, Harper, and Sadie; and one sister-in-law, Louella Chiz of Elk Grove Village. In addition to his wife, Jeannette Chiz, Edward is preceded in death by his parents and one brother, George Chiz. Private graveside services will be held at Abraham Lincoln National Cemetery in Elwood.

The family of Edward C. Chiz created this Life Tributes page to make it easy to share your memories.