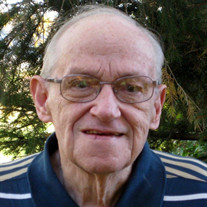 Edwin (Ed) James Mullady, 94, of Kankakee, Illinois, died peacefully on Sunday, Dec. 13th, after a short illness. Loving husband, father, son, brother, grandfather, and great-grandfather, Ed was a kind man whose life was devoted to preserving the environment, in particular the Kankakee River. In 2009, the Bourbonnais Friendship festival asked him to be the Grand Marshal of their Grand Parade. At the time, local writer Mary Ann Kirsch wrote a lovely article about Ed, and she has graciously allowed his family to include portions of it here: Selecting Ed Mullady as the Grand Marshall for this year's Grand Parade was truly a simple choice. For, if there were an official River Keeper for the Kankakee, he would be the choice, hands down. It is a role he's taken on for well over 50 years and one he will hang on to as long as he can. Born in Momence [on October 8th] in 1926, Ed fell in love with the Kankakee River at the age of three when he became fascinated with the water that flowed past his parents' produce business. As years passed, his fascination turned to passion as he became aware that such a wonderful body of water had a life and health of its own. It was during his boyhood days attending school at St. Patrick's in Momence that he discovered a desire to write and report. While in 7th and 8th grades he wrote, produced, and distributed a daily one-sheet newsletter to fellow students. He branched beyond that to sending local basketball news to the Kankakee Republican (now Daily Journal). Before his commitment to the river established a lifelong foothold, Ed married. He and his wife, Myrtle, raised eight children: Richard, Theresa, Patrick, Tim, Monica, Matt, Christine, and Nancy, deceased. To pay the bills, Ed worked for many years in the sports department at Montgomery Ward and then went to work at Salkeld's Sports on South Schuyler Avenue. Then, in September of 1958, a wonderful thing happened. Mullady wrote, published, edited, and distributed the First Edition of Sportsman's Letter. From that day to today, nearly 51 years later, Ed Mullady has continued to write/publish and distribute 258 editions of Sportsman's Letter, never once ever straying from his hopes, goals, and love for the river. "Late last year my lifetime fishing partner and wife, Myrtle, passed away," states Ed. "She and I often discussed how proud we are that all our grown-up youngsters and their children have a deep respect for the outdoors and for our rivers." And, as long as Ed Mullady has a breath left in him, his feelings about this will not wane, quite the opposite. He wants to continue to spread the word to other families, other communities. "The love of the river has always been uppermost in my mind." Along with preserving the cleanliness and beauty of the Kankakee River, Ed also encouraged others to partake in his hobby of fishing on his beloved river. For 53 years Ed produced his radio show The Big Outdoors on WKAN radio. He used his platform to not only inform readers of the best fishing spots along the Kankakee River, but to also advocate for protection of this beautiful waterway. His persistence in fighting for the Kankakee River got him appointed by then Gov. Jim Thompson to the Kankakee River Task Force, and he then was later appointed by then state Rep. Charles Pangle to the Kankakee River Basin Commission. In 1988 he won the Northern Illinois Anglers Association Award of Merit. In 1989 he won the “Take Pride in America” award from the U.S. Dept. of Interior. His love of the river also earned him the 2000 Conservation Award by the Chicagoland Fishing, Hunting & Travel Show, 2001 Honor Roll Award from the National Conservation Izaak Walton Group, the Russell Sinclair News Media award for his conservation writing, the Lockport Area Exchange Club Speaker Emeritus award in 2004, induction into the Illinois Outdoors Hall of Fame in 2011, and The Daily Journal’s 2012 Lifetime Achievement Award. Ed is survived by one brother, Lou Mullady (Arkansas), seven children: Rick Mullady (Yong) of Huntsville, Alabama; Terry Guymon of Willow Springs, IL; Pat Mullady (Pam) and Matt Mullady (Teri) of Kankakee, IL; Tim Mullady (Joy) of Bourbonnais, IL; Monica Neill (Gary) of Apache Junction, AZ; Chris Fisherkeller (Jim) of Round Lake Beach, IL and 17 grandchildren, multiple great-grandchildren, several great-great-grandchildren, and numerous nieces and nephews. Ed will be reuniting with his beloved wife and fishing partner, Myrt (deceased in 2008), his daughter, Nancy (deceased in 1977), his sister, Pat Schaefer, his parents, Frank and Bertha Mullady, and many other beloved relatives and friends. Cremation rites will be accorded. A memorial visitation will be held from 4 p.m. until the time of the 6 p.m. memorial service on Thursday, July 22, 2021 at Clancy-Gernon-Hertz Funeral Home in Kankakee. Inurnment will be held, prior to the service, at Abraham Lincoln National Cemetery in Elwood. In honor of Ed’s devotion to the Kankakee River, donations may be made to the Friends of the Kankakee River by going to http://friendsofthekankakee.org/wp-content/uploads/membership.pdf or mailing to Friends of the Kankakee P.O. Box 13 Watseka, Il 60970.

The family of Edwin (Ed) James Mullady created this Life Tributes page to make it easy to share your memories.