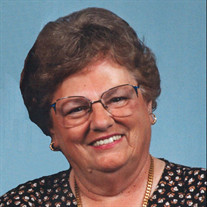 Elizabeth A. “Liz” Arseneau, age 94, of Bourbonnais passed away Thursday, August 26, 2021 at Heritage Woods in Manteno. She was born February 23, 1927 in Kankakee, the daughter of Artie & Hazel (Meier) Mills. Liz married Ronald Arseneau on October 16, 1948. He preceded her in death on March 4, 2005. Liz was a Registered Nurse. She was a past regent of Women of the Moose. Liz enjoyed golfing, playing cards, knitting, sewing, crocheting, and Christmas cookie baking. She was an avid Chicago Bulls and Chicago Cubs fan. She loved being active. Liz was a wonderful grandmother and a devoted nurse. She was a parishioner of Maternity B.V.M. Catholic Church in Bourbonnais. Surviving are one son and daughter-in-law, David & Barbara Arseneau of Bourbonnais; two daughters and two sons-in-law, Sandra & Larry Zullo of Bourbonnais and Paula & William Brashear of Wheaton; six grandchildren, Christy (Scott) Pias, Jamie (Jeremy) Shoup, Katie O’Brien, Meghan (Matt) Hendrickson, and Lisa (Sean) Kluesner; six great-grandchildren, Jace, Camron, Quinn, Zoey, Addie, and Ian; two sisters, Eleanor Morris of CA and Jackie Bickerstaff of Glendale Heights; and several nieces and nephews. In addition to her husband, Ronald Arseneau, Liz is preceded in death by her granddaughter, Mary Brannstrom; her parents; two brothers; and five sisters. Visitation will be held from 10 a.m. until the time of the funeral Mass at 11 a.m. on Wednesday, September 1, 2021 at Maternity B.V.M. Catholic Church in Bourbonnais. Rev. Jason Nesbit will celebrate the Mass. Interment will follow at All Saints Cemetery in Bourbonnais. In lieu of flowers, memorials may be made to Maternity B.V.M. Catholic Church or AMITA St. Mary’s Hospital in Kankakee.

The family of Elizabeth A. "Liz" Arseneau created this Life Tributes page to make it easy to share your memories.

Elizabeth A. “Liz” Arseneau, age 94, of Bourbonnais passed away...