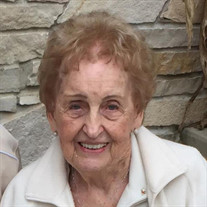 Elvina Vondrak, age 97, of Orland Park, passed away on Tuesday, March 1, 2022 at Prairie View Lutheran Home in Danforth. She was born on March 23, 1924, in Chicago, the daughter of Joseph and Frances (Bienka) Pauly. She married Edward “Ed” Vondrak on October 12, 1943 in Chicago. He preceded her in death on February 14, 2010. Elvina worked in banking her whole life, except during World War II, when she worked at Ford Motor Company in Chicago. Her last job was at the age of 92, as a greeter at AJ Smith Bank in Orland Park. Elvina spent many summers at Boyd’s Mason Lake Resort with family and friends. She was a fantastic caretaker to her family and doted on her son. Elvina enjoyed crocheting, cards, and playing the penny slots. She was a practicing Catholic at St. Nicholas of Tolentine Catholic Church in Chicago. Elvina is survived by one son, Robert (Sharon) Vondrak, of Ashkum; two grandchildren, Gretchen (Jeff) Juergens, of Arlingon, VA and Brandon (Jacquelyn) Vondrak, of Frankort; four great-grandchildren, Garrett, Olivia, Samuel, and John; and several nieces and nephews. In addition to her husband, Ed Vondrak, Elvina was preceded in death by her parents; and one brother, William Pauly. Visitation will be held from 9:00 am until 11:00 am on Saturday, March 5, 2022 at Clancy-Gernon-Hertz Funeral Home in Kankakee. The Funeral Mass will be celebrated at 11:30 am at St. Patrick Catholic Church in Kankakee. Rev. John Peeters will officiate the Mass. Private burial will take place at Abraham Lincoln National Cemetery in Elwood. In lieu of flowers, memorials may be made to the Chicago Honor Flight or any other veterans’ charity of your choosing.

The family of Elvina Vondrak created this Life Tributes page to make it easy to share your memories.

Elvina Vondrak, age 97, of Orland Park, passed away on Tuesday,...