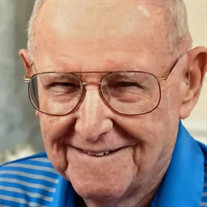 Ezra S. Allie, age 94, of Plant City, FL, formerly of Beaverville, passed away Saturday, April 3, 2021 at his home. He was born November 24, 1926 in Beaverville, the son of Leo & Verna (Fortin) Allie. Ezra married Lois Blakley on November 20, 1948 in Beaverville. She preceded him in death on July 1, 1998. Ezra was the owner/operator of Allie Grocery for over 30 years. He had also worked for J.R. Short Milling and was a bus driver. Ezra served as past president and was a member of the Lions Club and a member of the American Legion. He enjoyed golfing, achieving a hole in one at the age of 57. He coached baseball and basketball. Ezra was a veteran of the United States Army. He was a parishioner of St. Mary’s Catholic Church in Beaverville. Surviving are two sons and two daughters-in-law, Robert & Karen Allie of Land O’Lakes, FL and David & Maureen Allie of Pinellas Park, FL; two daughters and two sons-in-law, Linda & Mark Robbins of Tampa, FL and Tina & Tony Arseneau of Cerro Gordo; eleven grandchildren, Trista Summers, Nathan Allie, Karah Allie, Amanda Hopper, Kristy Boone, Kiley Allie, Adam Allie, Kayla Marando, Craig Allie, Daniel Arseneau, and Andrew Arseneau; and twenty-one great-grandchildren. In addition to his wife, Lois Allie, Ezra is preceded in death by his parents; two sons, Chuck Allie and Joe Allie; one daughter, Mary Jo Allie; and one brother, Allen Allie. Cremation rites have been accorded. A memorial visitation will be held from 9 a.m. until the time of the 11 a.m. memorial service on Saturday, May 29, 2021 at Clancy-Gernon-Houk Funeral Home in St. Anne. Inurnment will follow at St. Mary’s Cemetery in Beaverville. Memorials may be made to the National Multiple Sclerosis Society or to the Special Olympics.

The family of Ezra S. Allie created this Life Tributes page to make it easy to share your memories.