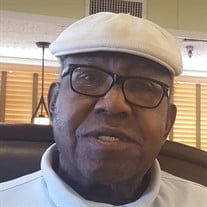 Floyd “Bud” Jones Jr, age 85, of Kankakee, passed away, Wednesday, December 24, 2020 at Citadel of Bourbonnais. He was born May 29, 1935 in Grady, Arkansas, the son of Floyd and Mary (Barber) Jones Sr. Bud married Evelyn Sheila Cothern on May 8, 1955. She preceded him in death. Bud married Alice Smith on May 19, 2001. She survives in Jacksonville, FL. Bud was a welder and air brakeman at Throll Car Company until his retirement. He was a Deacon at his church. Surviving are three sons and one daughter-in-law, Christopher Floyd Jones of Gary, Indiana, Daniel Lamont Jones of Phoenix, Arizona, Arthur Jones of Milwaukee, Wisconsin, and Marva Jones of Fontana, California; two daughters and sons-in-law, Sheila Anne (Vincent) Bellamy, Kankakee and Pamela (Emmanuel) Rollins of Austin, Texas; one sister, Etta Foster of Phoenix, Arizona; one brother and sister-in-law, Nathaniel (Maxine) Jones of Phoenix, Arizona; eleven grandchildren and fourteen great grandchildren. Bud is preceded in death by his parents; one son, Willie Terrance Jones; one daughter, Willie Mae Jones; and one sister, Rosie Lee Jackson. Private services will be held. Memorials may be made to the family wishes. Arrangements are being handled by Clancy-Gernon Funeral Home, Kankakee.

The family of Floyd "Bud" Jones Jr. created this Life Tributes page to make it easy to share your memories.