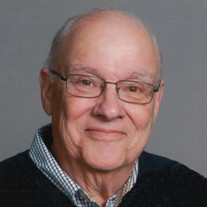 Fredrick J. Mancuso, age 78, of Bourbonnais passed away Thursday, July 1, 2021 at AMITA St. Mary’s Hospital in Kankakee. He was born January 6, 1943 in Kankakee, the son of Philip & Doris (Lade) Mancuso. Fred married Linda Walsh on August 22, 1970 at St. George Catholic Church. Fred was a former employee of National Tea Grocery and retired from Belson’s Steel Center, where he was the manager for new steel sales. He was a graduate of Kankakee High School. Fred was a member of the Knights of Columbus and the Ford Mustang Club. He was a former board member of Easter Seals, where he was involved in Special Olympics. Fred enjoyed gardening, hunting, and snowmobiling. Most of all, he loved spending time with his children and grandchildren. He was a parishioner of St. George Catholic Church. Surviving are his wife, Linda Mancuso of Bourbonnais; two sons and one-daughter-in-law, Eric Mancuso of Bourbonnais and Adam & Anna Mancuso of Chicago; one daughter and son-in-law, Kimberly & Jeremy Wilkey of Bourbonnais; five grandchildren, Isabella, Olivia, Zoe, Kaylin, and Logan; one brother and two sistesr-in-law, Thomas & Carlene Mancuso of Kingsport, TN; and sisters-in-law and brothers-in-law, Rita & John Mroz of Bourbonnais, Mark & Michele Walsh of Bourbonnais, Patty Walsh of Kansas City, MO, Margaret Walsh of IN; Cheryl Mancuso of Kankakee, and Charles Dubie of Manteno. Fred is preceded in death by his parents; two brothers, Paul Mancuso and Joseph Mancuso; and one sister Mary Ann Dubie. Visitation will be held from 5-7 p.m. Tuesday at Clancy-Gernon Funeral Home in Bourbonnais. A funeral Mass will be held at 11 a.m. Wednesday at St. George Catholic Church. Rev. Dan Belanger will celebrate the Mass. Burial will follow at St. George Cemetery. In lieu of flowers, memorials may be made to Good Shepherd Manor or St. George Catholic Church.

The family of Fredrick J. Mancuso created this Life Tributes page to make it easy to share your memories.