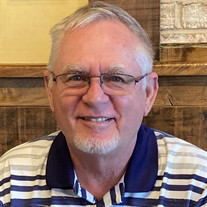 Gary R. Lundgren, age 72, of Kankakee passed away Saturday, May 15, 2021 at his home. He was born August 20, 1948 in Chicago, the son of Kenneth & Joanne (Barnes) Lundgren. Gary married Louise Hurtenbach on June 5, 1976. Gary was a 1967 graduate of Maine South High School in Park Ridge. He was a union tuckpointer in the Chicagoland area. Gary was an avid sportsman. He played softball, tennis, and wrestled in high school. Gary was dedicated to his children’s sports and Scouting. He was a “MacGyver” of all things. He had an unlimited supply of “Dad” jokes. Gary was a veteran of the United States Marine Corp, having served during the Vietnam War. Surviving are two sons, Jack Lundgren of Des Plaines and David Lundgren (Mindi Turf) of Arlington Heights; one daughter, Elizabeth Lundgren (Chris Stahlmann) of Arlington Heights; three grandchildren, Stella, Nathaniel, and Elliott; one brother, Dennis Lundgren of Des Plaines; his life partner, Sheri Schneider of Kankakee; Sheri’s children, Jarret & Holley Schneider of Mesa AZ, Erika & C.J. Osback of Bloomington, and Jenna & Ryan Krupianik of Bonfield and their children, Canyon, Austin, Dalton, McCadyn, Jailyn, Jace, and Noah; and his three legged fur baby, Cooper. Gary is preceded in death by his parents. A memorial visitation will be held from 9 a.m. until the time of the 10:30 a.m. with memorial service to follow on Friday, May 21, 2021 at Central Christian Church in Bourbonnais. Please wear a face mask and practice social distancing guidelines. Inurnment will be at Ridgewood Memorial Park in Des Plaines. In lieu of flowers, and in memory of Gary’s mother, please make memorials to suicide prevention. Arrangements by Clancy-Gernon Funeral Home in Bourbonnais.

The family of Gary R. Lundgren created this Life Tributes page to make it easy to share your memories.

Gary R. Lundgren, age 72, of Kankakee passed away Saturday, May...