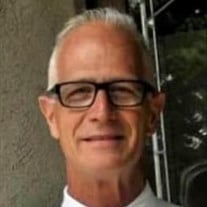 Gerald Paul LaFond, age 67, of Kankakee passed away peacefully, surrounded by his sons, on Wednesday, Dec 1, 2021 at his home after a courageous fight with cancer. He was born June 8, 1954 at St. Mary’s Hospital in Kankakee, the third child of four to Francis “Barney” LaFond and Lauretta Cruywells. A born charmer, Jerry gathered friends and family everywhere he went. He had a kind soul, the likes of which one encounters so rarely in life. He made you feel special, loved no matter what, and the ever-present smile on his face lit up each space he entered. Jerry radiated contagious positivity and always looked for the good in everyone and in every situation. His love for life was unparalleled. Jerry was also a daredevil at heart. At any point in his life, you could find him on his motorcycle, boating, hiking a mountain, waterskiing, hunting, exploring, snow skiing, or biking. Never one content to let life happen to him, he rushed to meet adventure wherever he could find it. He also had a love affair with art, mentored by the late, great Orion Hargett after whom he named his oldest son. Jerry moved to Steamboat Springs in 1982 and fell in love. This love of Colorado remained with him throughout his life. Jerry married Kimberly Johnson in 1981 and had 3 sons who were the absolute joy of his life: Orion, Nicholas, and Lucas. For all of the happiness he found in adventure and art, nothing could compare to the love he had for his sons. He translated his adventurous spirit into making their lives full of wonder through weekend camping excursions, snow skiing in Wisconsin, and frequent waterskiing on the Kankakee River and Lake Shafer in Indiana. The boys became his whole universe and he dedicated his life to them. His heart only swelled with the addition of his grandchildren. Jerry’s jubilant spirit and his zest for life, love, and adventure live on in his descendants. Jerry is survived by his sons, Orion LaFond of Kankakee, Nicholas LaFond and Megan Grant of Saint Anne, and Lucas LaFond of Kankakee; two grandchildren, Joaquin Diaz and Rhona LaFond; his sons mother and friend, Kimberly (Marty) Nissen; three sisters, JoRetta (Bryan) Brady, Juanita Curtis, and Lana (Andrew) Denault; nieces and nephews, Jaclyn (Dan) Gordon and family, Austin (Rachel) Denault, DiEnne (Jim) Glover and family; brother-in-law and friend, Rick (Kristi) Johnson and family; sister-in-law and friend, Ginger (Alan) Cook and family; and many, many friends. He was preceded in death by his parents, Barney and Lauretta LaFond; nephew, Joseph Curtis; and special friends, Tim West and Ray Montalta. Visitation for Jerry will be held on Monday, December 6, 2021 from 4 p.m. to 7 p.m. at Clancy Gernon Funeral Home in Bourbonnais. A funeral mass will be celebrated on Tuesday, December 7, 2021 at 10 a.m. at St. Mary’s Catholic Church a.k.a. The “Cathedral of the Cornfields” in Beaverville, IL where he was a member. Jerry’s great-grandfather, Philius LaFond, helped build St. Mary’s Church. Jerry took extreme pride in this knowledge. If you attend services, look for his name engraved on a front pillar. Burial will be immediately following the service in St. Mary’s Cemetery. Jerry will be laid to rest among many loved and cherished LaFond family members. In lieu of flowers, memorials may be made to St. Mary’s Catholic Church in Beaverville, IL.

Gerald Paul LaFond, age 67, of Kankakee passed away peacefully, surrounded by his sons, on Wednesday, Dec 1, 2021 at his home after a courageous fight with cancer. He was born June 8, 1954 at St. Mary&#8217;s Hospital in Kankakee, the third... View Obituary & Service Information

The family of Gerald Paul Lafond created this Life Tributes page to make it easy to share your memories.