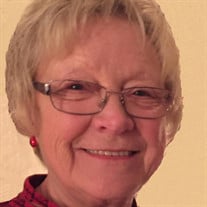 Geraldine “Gerrie” Heimlich, age 77, of Manteno passed away Monday, October 18, 2021 at her home. She was born January 5, 1944 in Harvey, the daughter of George & Saverine “Sally” (Rosolowski) Freese. Gerrie married Tom M. Heimlich on August 15, 1964 in Harvey. He preceded her in death on December 30, 2005. Gerrie was an excellent cook and hosted all the family holidays at her home. She loved Christmas and wished every day was Christmas. Gerrie made the best Christmas cookies. She followed all her grandchildren in their sporting events and was an amazing grandmother and their biggest fan. Gerrie was an avid Chicago Cubs and Chicago Bears fan. She was a parishioner of St. Joseph Catholic Church in Manteno. Surviving are two sons and two daughters-in-law, Ken & Roberta Heimlich of Manteno and Keith & Tiffany Heimlich of Elwood; six grandchildren, Tiffany (Adam) Toepper, Nick (Amanda) Chavez, Stefanie Chavez, Mason Heimlich, Ross Heimlich, and Noelle Heimlich; one sister, Dolores “Dolly” “Lardy” Roy; one sister-in-law, Joann Freese; and numerous nieces, nephews, and cousins. In addition to her husband, Thomas M. Heimlich, Geraldine is preceded in death by her parents and two brothers, George Freese and Robert Freese. Visitation will be held from 9 a.m. until the time of the 11 a.m. funeral service on Saturday, October 23, 2021 at Clancy-Gernon Funeral Home in Manteno. Interment will follow at St. Joseph Catholic Cemetery in Manteno. Memorials may be made to Uplifted Care

The family of Geraldine "Gerrie" Heimlich created this Life Tributes page to make it easy to share your memories.