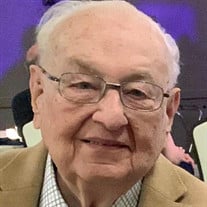 The Rev. Dr. Guy D. Warke, 86, of Bourbonnais, was called home to be with his Lord on Friday, March 11, 2022. He died suddenly but peacefully at home with his wife, Helen, at his side. He was born August 3, 1935, to Lawrence and Violet Warke in Detroit, Michigan, who preceded him in death. He attended Outer Drive Faith Lutheran Church in Detroit and credits a wonderful Sunday School teacher with building his faith. After his confirmation as a teenager, the Holy Spirit called him into the ministry. He attended St. John’s College, Winfield, Kansas for two years before entering Concordia Seminary in St. Louis, graduating in 1961. In the summer of 1958, he was a supply pastor at Grace Lutheran Church in Rialto, California. From August 1959 to July 1960, he served his vicarage at Faith Lutheran Church in Arlington Heights, Illinois, where he met Helen Jarosch, whom he married in June of 1961. In July of 1961, he was ordained and installed at his first parish at Grace Lutheran Church in Bradford, Pennsylvania. From 1964-1973 he served North Park Lutheran Church in Buffalo, New York. In 1973 he was called to Our Savior Lutheran Church, Bradley, Illinois. From 1980-1990 he was a night chaplain at Riverside Hospital. He received his Doctor of Ministry degree from Graduate Theological Foundation of Notre Dame in 1986 and was listed in Who’s Who in Religion 4th Edition (1992-1993). On August 31, 2000, he retired from active ministry after serving Our Savior, Bradley for twenty-seven years. Surviving are Helen, his wife of 60 years; three children: two daughters, Kathleen (Kurt) Stefans of Valparaiso, Indiana, and Amy (Roger) Gundersen of Concord, North Carolina; one son, Christopher (Amy) Warke of Bolingbrook, Illinois; seven grandchildren, Major Erik (Kara) Gundersen of Bellevue, Nebraska, Karin (Tom) Cranmer of Joliet, Illinois, Kyla Stefans of Grand Rapids, Michigan, Dr. Katie Gundersen of Knoxville, Tennessee, Karl Stefans of Valparaiso, Indiana, Collin (Nikki) Warke of Portage, Indiana, Abbey Warke of Bolingbrook, Illinois; and two great-grandchildren, Brennan and Evan Gundersen. Visitation will be 3:00 p.m. – 8:00 p.m. on Friday, March 18, 2022 at Clancy-Gernon Funeral Home in Bourbonnais. The funeral service will be held at 10:00 a.m. on Saturday, March 19, 2022 at Our Savior Lutheran Church. Visitation will be held 9:00 a.m. – 10:00 a.m. Saturday morning at the church. Entombment will follow at All Saints Mausoleum in Bourbonnais. Pastor Guy’s strong faith was a testimony to many, and he touched many lives. Memorials may be made to Our Savior Lutheran Church in Bradley, Grace Lutheran Church in Wilmington, Illinois, or the Alzheimer's Foundation.

The Rev. Dr. Guy D. Warke, 86, of Bourbonnais, was called home to be with his Lord on Friday, March 11, 2022. He died suddenly but peacefully at home with his wife, Helen, at his side. He was born August 3, 1935, to Lawrence and Violet Warke... View Obituary & Service Information

The family of Rev. Dr. Guy D. Warke created this Life Tributes page to make it easy to share your memories.