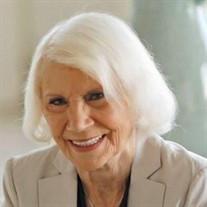 Jacqueline Ann “Jackie” Milner, age 94, of Chicago passed away Sunday, January 23, 2022 at her home. She was born September 3, 1927 in Reading, Pennsylvania, the daughter of William & Violet (Curley) Landis. Jackie married Lorin Eugene Milner on July 9, 1949 at Asbury Park in New Jersey. He preceded her in death on Jun 10, 1988. Jackie worked as a broadcaster. Jackie was a Big Band Singer in the late 1940s. It was during this time she met her future husband, Gene Milner, when she was booked as a singer for his radio show in Asbury Park, New Jersey. When she pivoted her career to broadcasting, Jackie shunned the spotlight but was notably the first woman speaker at the NAB (National Association of Broadcasters) Convention in 1973. She took great pride in being recognized by the State of Illinois Legislature for broadcast excellence, when they issued a day in her honor, on her 90th birthday. Jackie was an avid sports enthusiast. She loved her Cubbies and Rory McIlroy. Her favorite book: The Bible. Jackie read it every day. Her favorite day was Sunday, when she would attend The Moody Church on LaSalle Street in Chicago. In fact, she attended every Sunday for over 35 years. Jackie worked actively in radio throughout her life and only just retired when she turned 90 years old. She was a member of the Moody Church in Chicago. Surviving are her children, Lauren & Bruce Strinden of Mandan, ND, Michael & Lori Milner of Stuart, FL, Timothy Milner of Bourbonnais, and Cherie & David Hoffman of Alpharetta, GA; one sister, Joan Cordon of Santa Clarita, CA; ten grandchildren, Judge Kirby, Mackenzie Kirby, Eugene Milner, Alexandra Milner, E Thomas Hoffman, Jacqueline Hoffman, Scott Hoffman, Charlton Milner, Maxwell Milner, and Samantha Milner; and seven great-grandchildren, Isabella, Jacqueline, Evangeline, Santiago, Wilder, Wells, and Rhodes. In addition to her husband, Lorin Milner, Jackie is preceded in death by her parents; one son, Tommy “Judge” Milner; and two brothers, William Landis and Robert Landis. Cremation rites have been accorded. A celebration of life for Jackie will be held this spring in Ft. Lauderdale, FL. At that time, they will inurn her next to her beloved son, Tommy Judge in Forest Lawn Memorial Gardens in Ft. Lauderdale, FL. In lieu of flowers, memorials may be made in her name to the Riverside Healthcare Foundation or Youth for Christ in Kankakee. Jackie's family invites you to tune in to WVLI 92.7FM this Sunday, January 30, 2022 at 7PM CST, as they dedicate the Great American Songbook Show in Jackie's honor.

The family of Jacqueline A. Milner created this Life Tributes page to make it easy to share your memories.