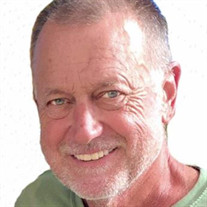 James Charles Keller, age 70, of Bourbonnais passed away on Wednesday, April 7, 2021 at his home. He was born in Bloomington, the son of Robert & Irene (Behrens) Keller. Jim graduated from Kankakee Westview High School and Illinois State University, with a degree in political science. After a career in packaging sales, he began the Cupola House Tree Farm in Bourbonnais in 1989. There he created a place very meaningful to him, his family, and at Christmas time, to many others. Jim was thrilled to keep the farm in his family and have his son continue the Christmas tree farming tradition. After transitioning into semi-retirement, Jim built an actual castle keep in the Norman style with about 65 tons of stone from his farm. Jim was a member of St. Paul’s Episcopal Church in Kankakee, where he held many leadership positions. He was a 20 year direct-patient volunteer for Hospice of Kankakee Valley, now known as Uplifted Care. He enjoyed growing a variety of things at his farm, reading, sailing, and traveling. Surviving are his wife of 50 years, Christie (Troup) Keller; one daughter and son-in-law, Laura & Andy Wheeler of Kankakee; one son and daughter-in-law, Ben & Betsy Keller of Bourbonnais; four grandchildren, Evan Regnier, Jackson Wheeler, William Keller, and Leah Keller; and two sisters, Marilyn Rittmeyer of Arlington Heights and Barbara Dilbeck of Dallas, TX. Cremation rites have been accorded. A celebration of life will be held from 10 a.m. until the time of the 11 a.m. memorial service on Saturday, June 26, 2021 at St. Paul Episcopal Church in Kankakee. In lieu of flowers, memorials may be made to St. Paul’s Episcopal Church, 298 S. Harrison Ave. Kankakee, IL 60901.

The family of James Charles Keller created this Life Tributes page to make it easy to share your memories.

James Charles Keller, age 70, of Bourbonnais passed away on Wednesday,...