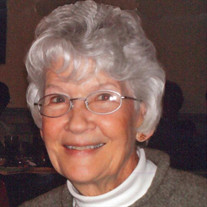 Jane Ann Meyer, age 86, of Kankakee passed away peacefully Saturday, December 12, 2020 at Riverside Senior Life Communities surrounded by her family. Jane was born on June 3, 1934 in Paxton, IL, the daughter of William & Annamae (nee Chambers) Thompson. She graduated from Paxton High School in 1952. She attended Illinois State University from 1952-1956. It was there that she met the love of her life, Alan Meyer. On June 10, 1956, a day after graduating, they were married. They moved to Baltimore, MD where Alan was stationed in the United States Army. They returned to Illinois to begin their teaching careers in Peotone. In the early 60’s, Alan began working for his father-in-law, William Thompson, who had begun opening several restaurants called the Redwood Inn. In 1964, Alan & Jane became the operators of the Kankakee locations. As Jane once said, “This is a family run establishment and the people working with us and the people we serve are part of our family.” Jane & Alan both believed that this core philosophy allowed them to run a flourishing business for 34 years. Jane was an active volunteer in the Kankakee community. She held many offices in her 30 years as a member of the Riverside Auxiliary. She served on the Riverside Medical Board of Directors and on the Oakside Board of Directors. Jane also served for years on the Helen Wheeler Center for Community Mental Health Board. She was honored as Riverside Samaritan of the Year in 1995 as an individual and in 2014 as a member of the Riverside Auxiliary. Perhaps most fitting was her service on the Riverside Senior Living Center Board helping to plan the facility where she and her husband would eventually reside. In 2013. Jane was honored as a Riverside Emeritus Board Member for all the years of involvement marked with excellence and generosity of time and talent. Gardening brought Jane much joy. As a member of the Kankakee Kultivators, her beautiful garden was featured several times. She and Alan volunteered for years to ensure that the Kankakee YMCA grounds were beautifully landscaped. Jane was a loving mother to Lynn and Tamra; Memaw to her grandsons whom she loved dearly, Justin, Adam, Ryan, Tyler, and Aaron; and her great-grandchildren, Jace, Callie, Miles, and Kaia. She is survived by her husband, Alan Meyer; two daughters, Lynn (Greg) Cornwell and Tamra (Jeff) Compton; grandsons; great-grandchildren; three sisters, Susan (Dan) Lamb, Dianne (Roger) Wissmiller, and JoHannah (Brad) Reardon; and many nieces, nephews and their families. Jane was preceded in death by her parents; her brother and sister-in-law, Alan & Donna Thompson; and her beautiful great-granddaughter, Kaia Cornwell. A private celebration of life will be attended by her husband, children, and grandchildren.

The family of Jane Ann Meyer created this Life Tributes page to make it easy to share your memories.