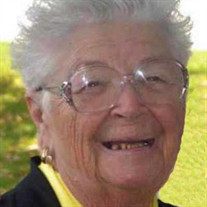 Jeral Lou “Jerry” Regnier, age 91, of Bourbonnais passed away Monday, March 29, 2021 at her son’s home in Kingman, IN. She was born September 1, 1929 in Oak Park, the daughter of Louis & Juanita (Reagles) Albright. Jerry married Paul V. Regnier on November 27, 1947. He preceded her in death in 2001. Jerry is a retired Bourbonnais Township Assessor. She was a graduate of Notre Dame Academy in Bourbonnais. Jerry enjoyed traveling and gardening. She loved spending time with her family. Jerry was a parishioner of Maternity B.V.M. Catholic Church. She was also a member of the Ladies of St. Anne. Surviving are three sons and four daughters-in-law, Steven & Patty Regnier of Clifton, Richard & Cheryl Regnier of Canton, Randy & Sherry Regnier of Kingman, IN, and Beddie Regnier of Lutz, FL; two daughters and one son-in-law, Christine Regnier of Arcadia, FL and Adele & Donald McVey of Manchester, NH; twenty-two grandchildren; fifty-four great-grandchildren; and eighteen great-great-grandchildren. In addition to her husband, Paul V. Regnier, Jerry is preceded in death by her parents; one son, Lewis “Butch” Regnier; one grandson, Shane; and one great-grandchild, Clayton. Visitation will be held from 9-10:45 a.m. Monday, April 5, 2021 at Clancy-Gernon Funeral Home in Bourbonnais. A funeral Mass will be celebrated at 11 a.m. also on Monday, April 5, 2021 at Maternity B.V.M. Catholic Church in Bourbonnais. Please wear a mask and practice social distancing guidelines. Burial will follow at Maternity B.V.M. Cemetery in Bourbonnais.

The family of Jeral Lou "Jerry" Regnier created this Life Tributes page to make it easy to share your memories.