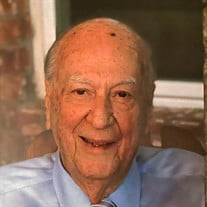 Joel Richard Brault was born on November 16, 1931, in Kankakee, Illinois, to Frédéric and Cecilia Brault. He passed away Wednesday, July 21, 2021. Joel is preceded in death by his parents; loving wife, Patricia (Brouillet) Brault; brother Richard Brault; sisters Joyce Cosgrove, and Monica Lambert. Left to cherish Joel’s memory are his daughters Michelle (David) Chandler, Cindy (Randy) O'Connell all of Pearland, Texas Kathie Jo Brault, of Fairfield, IL, sister Carol Schafer of Kankakee; grandchildren Meagan (Neil) Rosser, Beth (Ryan) Buxbaum, Robin O'Connell of St. Charles, MO; great grandchildren Joel, Chandler, Kohen, Crew, and several nieces and nephews. Joel and Patricia started courting after graduating from St. Patrick Catholic High School. They became engaged while Joel was serving in the Air Force. He spent a year of his service as a weatherman in Iceland. They married in 1953 and were blessed with over 54 years together. Joel had a successful career as a real estate agent and transitioned to the savings and loan business. He worked as Vice President of State Savings and Loan from 1960 to 1984. He then helped create Olympic Federal Savings and Loan where he served as President from 1985 to 1992. Joel loved listening to jazz, and he was a huge Stan Kenton fan. In his spare time, Joel enjoyed golfing with his wife, Patricia. They also loved traveling and over the years they enjoyed many trips together. Joel will be missed by all who knew and loved him. In lieu of flowers the family would like to request that donations be made to St. Jude’s Children’s Hospital. A memorial visitation will be held from 11-12:00 noon on Friday, August 27, 2021 at Clancy-Gernon Funeral Home in Bourbonnais. Inurnment will follow at Maternity Cemetery in Bourbonnais.

The family of Joel Richard Brault created this Life Tributes page to make it easy to share your memories.