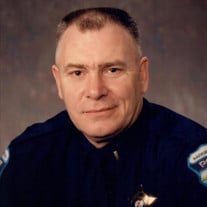 John Edward Gerard died on July 6, 2021 at Citadel Care Center of Kankakee. Visitation will be held on Friday, July 9 from 4 to 8 p.m. at Clancy-Gernon-Hertz Funeral Home in Kankakee, with the Holy Rosary to be prayed at 7:30 p.m. A Mass of Christian Burial will be celebrated at St. Rose of Lima Chapel in Kankakee by Father Andrew Clyne on July 10 at 10:30 a.m., followed by burial at Mt. Calvary Cemetery in Kankakee. Memorials may be made for Masses. Mr. Gerard was born on his family’s farm in Aroma Township, Kankakee County, on March 6, 1936, the youngest child and only son of John E. Gerard and Sarah Lucille Flatt. He received new life in Christ through baptism on May 24, 1936, at St. Patrick Church in Kankakee. In addition to his parents, Mr. Gerard was predeceased by sisters Evelyn Marie Davis, Dorthy Ann Barber and Sarah Jane Martinez. Mr. Gerard married the former Betty Mae Robbins, who survives him, at St. Mary’s Immaculate Conception Church in Kankakee on June 11, 1960. The couple had four children: Robin E. Gerard (deceased), David J. Gerard of Kankakee, Debra A. (Robert) Heinlein of Crown Point, Ind., and John M. (Cindy) Gerard of Fort Myers, Fla. Mr. Gerard also is survived by two grandsons: Michael R. (Gretchen) Heinlein of Fort Wayne, Ind., and John E. Gerard of Fort Myers, Fla.; two great-grandchildren: Joseph G. Heinlein and Anne T. Heinlein of Fort Wayne, Ind.; many sisters and brothers in-law, nieces and nephews, and former colleagues and friends. Mr. Gerard proudly served his country in the U.S. Marine Corps from 1958-61. He joined the Kankakee Police Department on July 1, 1961, where served for nearly 35 years. Mr. Gerard quickly rose through the ranks and in 1974 was named Kankakee’s Assistant Chief of Police and later Deputy Chief of Police in 1985. For a time, he served as acting police chief before his retirement from the department in 1995. During his time at the department, Mr. Gerard helped establish the Kankakee Junior Police Academy, the S.W.A.T. team and the Kankakee Area Metropolitan Enforcement Group (KAMEG), and organized many charitable endeavors on behalf of the police department. Over the years, Mr. Gerard represented the police department at many professional shooting competitions and took home several awards. He fired his gun on duty only 2 or 3 times in his career, once to save the life of Sgt. Robert Pepin. In his retirement, Mr. Gerard stayed active in the community, including several years providing security at Peoples Bank of Kankakee. For over 40 years, Mr. Gerard served as a mentor and coach to dozens of young people at his Gold Star Gym Boxing Club in Kankakee, several of whom were champions in the Chicago Golden Gloves and a few who went on to fight professionally. He was a lifelong fan of St. Louis Cardinals baseball. Please pray for the repose of his soul and that he be at peace in Jesus Christ as he awaits the resurrection of the body and the life of the world to come.

John Edward Gerard died on July 6, 2021 at Citadel Care Center of Kankakee. Visitation will be held on Friday, July 9 from 4 to 8 p.m. at Clancy-Gernon-Hertz Funeral Home in Kankakee, with the Holy Rosary to be prayed at 7:30 p.m. A Mass of... View Obituary & Service Information

The family of John Edward Gerard created this Life Tributes page to make it easy to share your memories.