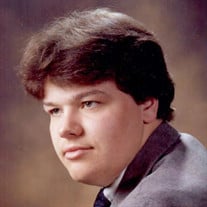 John E. Hosty Jr., age 54, of Bourbonnais passed away Wednesday, July 28, 2021 at AMITA St. Mary’s Hospital in Kankakee. He was born September 15, 1966 in Chicago, the son of John E. Sr. and Anyta (Trakys) Hosty. John married Violet Mieliulis on December 31, 2005 in Joliet. John was a Senior Plan Assigner for AT&T and served as a Union Steward for IBEW Local 21. He was a Scouting Leader for the Boy Scouts of America and helped save Owassippe Boy Scout Camp in Twin Lakes, MI. John was a member of the Knights of Columbus and Kankakee Railroad Museum. John served in the United States Army Reserves. Surviving are his wife, Violet Hosty of Bourbonnais; five sons, John Edward Hosty III of Bourbonnais, Mark Hosty of Phoenix, AZ, Christopher Smola of Bourbonnais, Timothy Smola of Crest Hill, and Matthew Smola of Crest Hill; one daughter, Lauren Hosty of Phoenix, AZ; his mother, Anyta Hosty of TX; and three sisters, Margaret Hosty, Elizabeth Hosty, and Susan Hosty. John is preceded in death by his father Cremation rights have been accorded. A memorial visitation will be held from 2 p.m. until the time of the 4 p.m. memorial service on Saturday, August 7, 2021 at Clancy-Gernon Funeral Homes in Bourbonnais. Memorials may be made to the Kankakee Railroad Museum.

The family of John E. Hosty Jr. created this Life Tributes page to make it easy to share your memories.