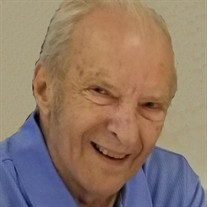 John James Nagy, age 91, of Custer Park, passed away Wednesday, January 20, 2021 at his home. He was born October 14, 1929 in Hammond, Indiana, the son of John and Mary (Scripnec) Nagy. John married Arlene Thompson on August 21, 1954 in Chicago. John was a steel worker for Inland Steel. John was a veteran of the United States Navy, serving from 1950 to 1954. He was on the USS Wisconsin during the Korean War. John was a member of the American Legion. He loved bowling, the Chicago Cubs, watching sports and watching his grandchildren play sports. John loved spending time with his family, especially his children, grandchildren, and great-grandchildren. Surviving is his wife, Arlene; one son, John M. Nagy and his significant other, Sharon of Minnesota; two daughters and sons-in-law, Kathleen (John) Neyhart of Custer Park and Christine (Joe) Kish of California; one sister, Madeline Schmitz of Crete; one brother, Ronald Nagy of Munster, Indiana; four grandchildren, Elisabeth (Jamie), Christopher, Tiffani (Mike) , and Stefanie; six great-grandchildren, Emma, Addison, Arabella, Claire, Lillian and Katherine. John is preceded in death by his parents; and three siblings, Julius, Pauline and Ann Marie. Due to the COVID-19 pandemic restrictions, private family interment will be held at Abraham Lincoln National Cemetery in Elwood. Memorials may be made to the Family Wishes.

The family of John James Nagy created this Life Tributes page to make it easy to share your memories.