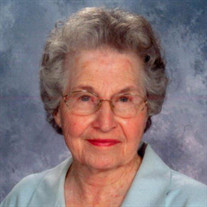 Joyce Barbara Holland Meier, age 97, of Kankakee passed on to God on Wednesday, February 23, 2022 in Long Grove. She was born September 22, 1924 in Pueblo, CO, the daughter of Irvin Carlyle & Hazel (McMahon) Holland. Joyce grew up in Coffeyville, KS. She was educated at Coffeyville Junior College and Texas Woman’s College. Joyce was a devoted wife, mother, homemaker, grandma, and friend who served her family, friends, neighbors, church family, and community in countless ways, including her volunteer work for the American Red Cross and Riverside Medical Center. She enjoyed reading, playing duplicate bridge with her circle of lifelong friends, as well as playing golf, tennis, and games of all kinds. As a 21-year-old in Coffeyville, KS, she learned to pilot small planes and met her future husband, Gordon Meier, as he was plucked from the University of Illinois School of Engineering to train for Army flight service during World War II. After the war, they returned to the University of Illinois to complete Gordy’s degree. Gordy and Joyce made their home in Gordy’s hometown of St. Anne and nearby Kankakee, the sites of the family businesses: Eastern Illinois Clay, Kankakee Clay Products, and the National Bank of St. Anne. Joyce supported the businesses in many ways. Surviving are one daughter, Deborah Ann Meier Gledhill and her husband Thomas of Barrington; four grandchildren, Christopher Gordon Gledhill of Fremont, CA, Patrick Emerson & Alpha Gledhill of Morrison, CO, Elizabeth Gledhill Fessler & her husband, Dr. David Fessler of Chicago, Jamie Frauenhoffer Clausen & her husband, John of Champaign; two great-grandsons, Jack Clausen and Max Clausen and a third great-grandson who is expected by Elizabeth & David Fessler in April 2022; friend, John Geldhill; and several nieces. Joyce is preceded in death by her parents; her husband, Gordon Glenn Meier; one daughter, Elizabeth Meier Frauenhoffer; two sisters, Jeanne Smith and Loy Lindsay; and one brother, Jack Holland. A graveside service will be held at 1:00 p.m. on Friday, March 25, 2022 at St. Anne Township Cemetery. In lieu of flowers, memorials may be made for MS Research at Rush University Medical Center in Chicago.

The family of Joyce Barbara Holland Meier created this Life Tributes page to make it easy to share your memories.

Joyce Barbara Holland Meier, age 97, of Kankakee passed on to...