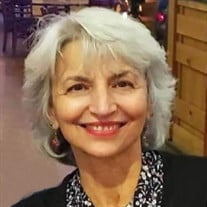 Kathrynanna O’Connell, age 73, of Ellicottville, NY passed away on Saturday, January 29, 2022 at her home. She was born September 23, 1948 in Rockford, the daughter of Paul & Mary (Parlapiano) Cerniglia. Kathie married James O’Connell on August 19, 1972 in Rockford. Kathie was a member of the American Association of Nutritional Consultants, and a valued employee of Natures Remedy Health Food Store in Ellicottville, NY. She owned an Italian Cookie business and was a licensed Cosmetologist. Kathie was also the Director of Koinonia Catholic Retreat, which she brought to Kankakee from Springfield, IL. Most of all, she loved spending time with her family and grandchildren. She was a parishioner of Holy Name of Mary Catholic Church in Ellicottville, NY. Surviving are two sons, John Paul “J.P.” & Jenna O’Connell of Ellicottville, NY and Daniel & April O’Connell of Hampshire; six grandchildren, Jordan, Juliana, Jack, Josephine, Thomas, and Benjamin; two sisters, Georgianna Cerniglia of Washington and Mary Martha Cerniglia of Muskegon, MI; one brother and two sisters-in-law, Ted & Suellan Cerniglia of Muskegon, MI and Diane Cerniglia of Herrin; and her former spouse, James “Jim” (Gloria) O’Connell of Bourbonnais. Kathie is preceded in death by her parents and one brother, Paul Cerniglia. Cremation rites have been accorded. A memorial visitation will be held from 9 a.m. until the time of the 10 a.m. memorial Mass on Saturday, February 26, 2022 at Holy Name of Mary Roman Catholic Church in Ellicottville, NY. Rev. Patrick Melfi will celebrate the Mass. Inurnment will follow at Holy Cross Cemetery in Ellicottville, NY. Memorials may be made to the family wishes or to Catholic Charities in honor of the adoption of her two sons. A Celebration of Life will be held at a later date in Bourbonnais, IL. Arrangements by Clancy-Gernon Funeral Home in Bourbonnais.

The family of Kathrynanna "Kathie" O'Connell created this Life Tributes page to make it easy to share your memories.