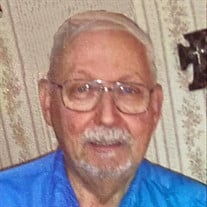 Kenneth F. Hansen, age 89, of Bourbonnais passed away Saturday, April 23, 2022, at Washington Senior Living in Washington. He was born March 8, 1933 in Chicago, the son of Emil and Ethel (Marecki) Hansen. Kenneth married Marilyn J. Trevillian on January 23, 1954 in Chicago. She preceded him in death on January 20, 2016. Kenneth was a retired forty-three year employee of the Rock Island Railroad where he served as Superintendent of Transportation. He was a graduate of St. Mel High School in Chicago. Kenneth was a member of the Association of American Railroads. He was a member of the 3rd and 4th Degree of the Knights of Columbus. Kenneth was a parishioner of the St. George Catholic Church, St. George. Surviving are two sons and three daughters-in-law, Ronald (Laura) Hansen of Fayetteville, NC, Richard (Sharon) Hansen of Washington, and Lori Hansen of Bradley; two foster children; Mark Telizyn and Dawn Sodomire; one sister, Lorraine Evans of Cape Coral, FL; six grandchildren, Amy, Angela, Adam, Alec, Heather, Michael; and seven great grandchildren. Kenneth is preceded in death by his wife, Marilyn; his parents; one son, Robert “Joey” Hansen; and two brothers, Russell Hansen and Robert Hansen. Visitation will be held from 11 a.m. until the time of the 2 p.m. funeral service on Thursday, April 28, 2022 at Clancy-Gernon Funeral Home in Bourbonnais. Rev. Dan Belanger will officiate the service. Entombment will follow at All Saints Mausoleum in Bourbonnais. Memorials may be made to St. George Catholic Church.

The family of Kenneth F. Hansen created this Life Tributes page to make it easy to share your memories.