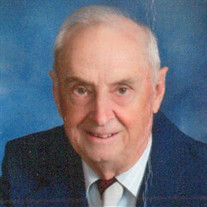 Kenneth R. “Kenny” Lafond, age 93, of Beaverville passed away Tuesday, January 4, 2022 at AMITA St. Mary’s Hospital in Kankakee. He was born September 28, 1928 in Beaverville, the son of Phillip & Flora (Dionne) Lafond. Kenny married Virginia Chiever on April 18, 1953 at St. Mary’s Catholic Church in Beaverville. She preceded him in death on July 13, 2015. Kenny had worked as an inspector at Roper Appliance for 38 years before working as a laborer for Curby Hardware until he retired to care of his wife until her passing. He enjoyed gardening and farming with his family. Most of all, Kenny enjoyed spending time with his family and watching his grandchildren play sports. Kenny was a member of the Village Board for over 50 years and served as Mayor for several terms. He had also been a longtime member of the Beaverville Fire Department. He was a member of the Donovan School Board for a number of years. Kenny was a parishioner of St. Mary’s Catholic Church in Beaverville. He was a veteran of the United States Army, having served during the Korean Conflict from 1951-1953. Surviving are his children and their spouses, Marcia & Mike Decker of Onarga, Paula & Craig Bull of Clifton, Joe & Cindy Lafond of Watseka, Sue & Tom Frye of Donovan, Donna Lafond of Beaverville, and John & Angela Lafond of Knoxville, TN; one sister, Ellen Mae Hall of Fishers, IN; fourteen grandchildren; twenty-five great-grandchildren; one great-great-grandchild; and several nieces and nephews. In addition to his wife, Virginia Lafond, Kenny is preceded in death by his parents; three brothers, Leonard, Viator, Romain; one sister, Mildred Reynolds; and one brother-in-law, Rex Hall. Visitation will be held from 2-6 p.m Sunday, January 9, 2022 at Clancy-Gernon-Houk Funeral Home in St. Anne. An additional visitation will be held from 10 a.m. until the time of the 11 a.m. funeral Mass on Monday, January 10, 2022 at St. Mary’s Catholic Church in Beaverville. Rev. Dan Belanger will celebrate the Mass. Interment will follow at St. Mary’s Cemetery in Beaverville. Memorials may be made to St. Mary’s Catholic Church or Uplifted Care.

The family of Kenneth R. "Kenny" Lafond created this Life Tributes page to make it easy to share your memories.