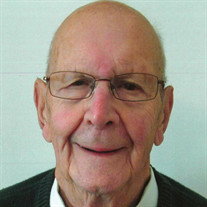 Mario John Sebastiani, 93 of Kankakee passed away June 7, 2021 in the house he loved. He was surrounded by those he lived for, his family. He was born February 25, 1928, the son of Eugene and Carlotta (Lenci) Sebastiani. He married the former Betty Bright on June 26, 1954. In his youth he was a paper boy for the Kankakee Republican (Precursor of the Daily Journal). At age 16 he officially began employment with the newspaper. It became his career for 65 years. His first responsibilities were the jobs in the pressroom no one else wanted to do like wiping down the presses. His older brother Louie was inducted into the navy during World War II. Mario took his place in circulation. When Louie came home, Mario returned to the pressroom and soon became a pressman. As improvements began to influence the printing of newspapers new offset presses were acquired. During this same period he became pressroom superintendant. The Daily Journal also became a print site for USA Today for the Chicago area. Under his supervision the Daily Journal won many prestigious awards for printing quality including several from USA Today. His final position with the paper was that of General Manager. He was instrumental in the day to day operation of the paper. His reputation and relationship with his peers was one of highest respect and admiration. He served in the army during the Korean War. Because of his printing experience he was stationed in Tokyo, Japan. Each day he would receive aerial photographs of the battle front and print maps for the field command that showed battle lines and troop placements. His military service ended in 1954. His great pleasure was to see things grow; primarily his garden and fruit trees. Every summer there was an abundance of vegetables and fruit to be picked and delivered to friends, family, co-workers, and acquaintances. His two most favorite spots on earth were his own back yard and in recent years his living room chair. From that viewpoint he could watch his plantings grow with one eye and the stock market with the other. He is survived by daughters Gina (Michael) Pullen and Linda (Jim) Scanlon; grandchildren, Mary (Mitch) Holmgren, Melissa (Peter) Chung, Brad Johnson, Stephanie (Mark) Alessi, Sarah (Kelly) Krippel; step grandchildren, Jenna Kostelicz, Jamie Panici and their families; great grandchildren: Brady and Ella Chung, Evan and Leah Alessi, Kyle Holmgren; sister in laws Dorothy and Elinor Bright; caregiver D’Angelo Hunter. He is preceded in death by his wife of 67 years Betty (Bright) Sebastiani, parents Eugene and Carlotta Sebastiani, beloved brother Louie Sebastiani, brother-in-law Joseph Bright, sister-in-law Elsie Menard. A time of remembrance will be held in his honor at Kankakee First Church of the Nazarene, 1000 North Entrance Avenue, Kankakee, IL Monday, June 14, 2021. There will be a short visitation from 10 to 10:30 AM followed by a service at 10:30 AM. Burial will be at Kankakee Memorial Gardens. Mario was a devoted husband, father, grandfather, and great grandfather. We were blessed to have had his love and presence in our lives. He was a great man with a great heart. In lieu of flowers memorials may be made to the family to carry out Mario’s wishes.

Mario John Sebastiani, 93 of Kankakee passed away June 7, 2021 in the house he loved. He was surrounded by those he lived for, his family. He was born February 25, 1928, the son of Eugene and Carlotta (Lenci) Sebastiani. He married the former... View Obituary & Service Information

The family of Mario John Sebastiani created this Life Tributes page to make it easy to share your memories.