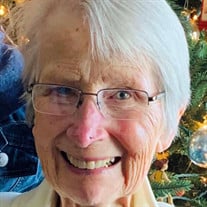 Martha R. Currier, age 94, of Kankakee passed away Friday, January 1, 2021 at Miller Health Care Center in Kankakee. She was born October 22, 1926 in Bradley, the daughter of Stanley & Florence (Dixson) Safiran. Martha married Al Currier in June of 1948 in Chicago Heights. He preceded her in death on April 14, 2011. Martha was a Librarian Clerk in Steger for District 194. She enjoyed her Pinochle club, which she was a longtime member of. Martha enjoyed baking, gardening, taking walks, and quilting. She especially enjoyed collecting antiques. Martha was a member of St. Liborius in Steger. Surviving are four sons and three daughters-in-law, Mark Currier of Bourbonnais, Randall & Joy Currier of Grant Park, Kevin & Lisa Currier of Aurora, CO, and Dan & Donna Currier of Humboldt, IA; six grandchildren; eight great-grandchildren; one sister, Dorothy Hendricks of Tucson, AZ; and two brothers and two sisters-in-law, Mike & Dolores Safiran of New Lenox and Peter & Cathy Safiran. In addition to her husband, Al Currier, Martha is preceded in death by her parents and one infant son, Alan Currier. Due to the COVID 19 pandemic, private family services will be held. Private inurnment will be held at Maternity B.V.M. Cemetery in Bourbonnais. Memorials may be made to St. Jude Children’s Hospital. Arrangements by Clancy-Gernon Funeral Home in Bourbonnais.

The family of Martha R. Currier created this Life Tributes page to make it easy to share your memories.