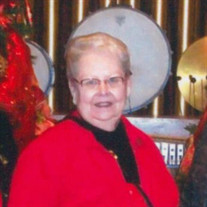 Mary A. Favors, age 86, of Lowell, IN, died Monday, February 14, 2022 at Franciscan Hospital in Crown Point, Indiana. Mary was born June 26, 1935 in Goreville, the daughter of Horace O. and Mary E. Jackson Green. Marry married L. Rae Favors on November 27, 1954. He preceded her in death in March of 2004. Mrs. Favors retired as manager from GNB Employees Credit Union in 2000, after 13 years of service. She had also been employed for 15 years at A.O. Smith Credit Union. Mrs. Favors was a member of the Order of the Eastern Star. She was an active member of the Red Hat Society and the Tuesday Book Review Club. Mary enjoyed golfing. Surviving are one son and daughter-in-law, Donald & Sandra Favors of Lowell, IN; her grandchildren, Jason and Ashley Favors, Mary J. and Adam Bodin, Michelle and Themi Hatzis, Nichole and Brad Jensen, Amanda and Rob Parchim, and Colin Foley; great-grandchildren, Connor, Taylor, Kaydence, Emma, Jason Jr., Rebecca, Nicholas, Zachary, McKinley, and Mason; one sister, Virginia Hutchinson of Mt. Vernon (age 103). In addition to her husband, Mary is preceded in death by one daughter Linda Foley; one son, Charles “Chuck” Favors; and her parents. Cremation rites have been accorded. A memorial visitation will be held from 10:00 a.m. until the 12:00 p.m. memorial service on Monday, February 21, 2022 at Clancy-Gernon-Hertz Funeral Home in Kankakee. Rev. Scott Henley will officiate the service. Inurnment will follow at Bonfield Cemetery in Bonfield. Memorials may be made to the family wishes. Please sign her guestbook at www.clancygernon.com

The family of Mary A. Favors created this Life Tributes page to make it easy to share your memories.