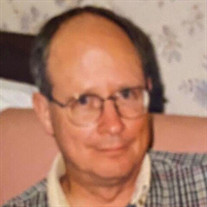 Michael “Mike” Joseph Irle, 75, a lifelong resident of Kankakee, passed away Friday (Dec. 25, 2020) after a four-year battle with lung cancer, at Harvest View Assisted and Independent Living in Herscher. He was the son of Everett and Catherine (McDermott) Irle, of Kankakee. His parents preceded him in death. Michael is survived by his wife, Patricia “Pat” (Toepper) Irle, with whom he was married to since Aug. 7, 1992. He is also survived by his three children, Lisa (Irle) Richmond and Todd Richmond, of Bourbonnais, Brian Irle and Amy (Reilly) Irle, of Bourbonnais, and Amy (Irle) Palmer and Andrew Palmer, of Kankakee; five grandchildren, Cortney Glidewell, of Willis, Texas, Emily Richmond, of Bourbonnais, Lucas Irle, of Bourbonnais, and Odin and Hazel Palmer, of Kankakee; and one great-grandson, Jace Glidewell, of Willis, Texas. He was proud of his children and grandchildren. He had five sisters and brothers-in-law. His three surviving sisters are: Ann (Irle) Stack and Richard Stack, of Huntley, Mary “Mimi” (Irle) DeCarlo and Greg DeCarlo, of Kankakee, and Patty (Irle) Taylor and Dennis Taylor, of Bourbonnais; and brother-in-law, Cary Alberts, of Cassleberry, Fla. Also surviving are Michael’s first spouse, Joyce (Lambert) Irle; Pat’s sons, Michael, Robbie and Andy Carr; and several brothers, sisters, grandchildren, nieces, nephews, great-nieces and great-nephews. In addition to his parents, he was preceded in death by his sister, Kathy (Irle) Hicks and brother-in-law, Rich Hicks; sister, Peggy (Irle) Alberts; one niece, Mary Jo; and one nephew, Steve Hicks. Michael was a veteran who served in our U.S. Army from 1965 to 1967. He retired from Com Ed, where he worked for 33 years. He was an amazing artist and gardener and had a quick wit. Throughout his life, he enjoyed, reading, playing guitar, golfing, fishing, “the hunt” for a bargain, attending his granddaughter’s soccer and volleyball games, researching historical sites, gardening, walking, traveling, music dancing and all things in nature. There will be a private family memorial service in the spring. In honor of his memory, everyone is asked to please pay tribute to his life by respecting and taking care of our natural surroundings and by helping sustain the beauty of nature.

Michael &#8220;Mike&#8221; Joseph Irle, 75, a lifelong resident of Kankakee, passed away Friday (Dec. 25, 2020) after a four-year battle with lung cancer, at Harvest View Assisted and Independent Living in Herscher. He was the son of Everett... View Obituary & Service Information

The family of Michael "Mike" Joseph Irle created this Life Tributes page to make it easy to share your memories.