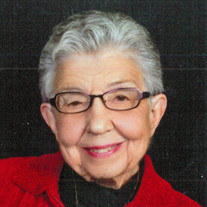 Noreen Angeline Saathoff, age 91, of Irwin passed away Thursday, April 15, 2021 at her home. She was born December 24, 1929 in Clifton, the daughter of Erwin & Irene (Wauthier) Cailteux. Noreen married Alvin Saathoff on May 11, 1957 at St. John the Baptist Catholic Church in L’Erable. He preceded her in death on November 26, 2002. Noreen grew up on a farm and learned at a young age how to work hard, which she carried throughout her life. She left for Chicago after graduating from Ash-Clif High School to attend St. Xavier College & Mercy Hospital Nursing School where she earned a BSN degree. Noreen enjoyed the city life and fondly remembers taking a streetcar to classes from her dorm. She began her nursing career at St. Mary’s Hospital as a Pediatric Charge Nurse and teaching Pediatric Nursing. She later worked as a nursing instructor at Kankakee Community College and had worked at St. Mary’s Hospital for 44 years. She retired from Home Care in 1995, which was the highlight of her nursing career. She was a loving care giver to her husband until his passing and then began her volunteer career at St. Mary’s Hospital in 2006 ending shortly before her 90th birthday. Noreen dearly loved caring for others and lived a life dedicated to others. Her biggest joy was her family, grandchildren, and great-grandchildren. She participated in their events and accomplishments and loved sewing and baking for them. Gardening and canning were always a huge part of her life. She had a deep love for the church and a rich, prayer-filled faith life. Noreen prayed many Holy Rosaries for her family and friends and attended St. James Church, where she volunteered as a parish nurse and was an active CCW member. She earned Women of the Year on two different occasions. Her generosity, love, and scotcharoos will be greatly missed. Surviving are her children, Marianne (Mike) Jamison of St. Charles, Mark Saathoff of Fort Madison, IA, Michael Saathoff of Murfreesboro, TN, Mary Beth (Ed) O’Connor of Herscher, and Marie Lynn Devlin of Darien; grandchildren, Eric (Kelly) Jamison, Kaylee Jamison, Travis (Kelli) Saathoff, Alisha Saathoff, Emily (Matt) Mackanin, Katie Saathoff, Heather (Josh) Wakey, Brennan O’Connor, Chad (Becky) O’Connor, Jason Devlin, and Joseph Devlin; great-grandchildren, Morgan Jamison, Stella Jamison, Leah Mackanin, Bennet Mackanin, Henry Mackanin, Payton Lamie, Bryant Lamie, Jarrett Wakey, Kendahl Wakey, Parker Wakey, Holden Wakey, and Declan O’Connor; brother, Myron (Linda) Cailteux, sister, Carol (Jerry) Deany; brothers-in-law, Wayne Jordan and Leo (Bonita) Saathoff. In addition to her husband, Alvin Saathoff, Noreen is preceded in death by her parents; one brother and sister-in-law, Harold (Sue) Cailteux; one sister, Dorothy Jordan; one daughter-in-law, Eunice Saathoff; and nephews, Rodney Cailteux, Richard Cailteux, and Doug Jordan. Visitation will be held from 4-7 p.m. Tuesday, April 20, 2021 at Clancy-Gernon-Hertz Funeral Home in Kankakee. A funeral Mass will be celebrated at 10 a.m. Wednesday, April 21, 2021 at St. James the Apostle Catholic Church in Irwin. Please wear a face mask and practice social distancing guidelines. Rev. Ron Neitzke will celebrate the mass. Burial will follow at St. James Cemetery in Irwin. In lieu of flowers, memorials may be made to the American Heart Association.

Noreen Angeline Saathoff, age 91, of Irwin passed away Thursday, April 15, 2021 at her home. She was born December 24, 1929 in Clifton, the daughter of Erwin & Irene (Wauthier) Cailteux. Noreen married Alvin Saathoff on May 11, 1957 at St. John... View Obituary & Service Information

The family of Noreen Angeline Saathoff created this Life Tributes page to make it easy to share your memories.