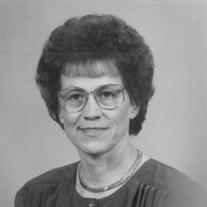 Norma O. Morgan, age 88, of Bourbonnais, passed away Thursday, March 10, 2022 at Morris Hospital. She was born February 27, 1934 in Fort St. John, British Columbia, Canada, the daughter of Addison & Ella Aikenhead Weis. Norma married Earl Morgan on March 27, 1971 in Alberta, Canada. He preceded her in death on May 27, 2020. She was a nurse and a career missionary. Norma enjoyed sewing and was very involved in Dare to Care Ministry at the Kankakee First Church of the Nazarene. Most of all, she enjoyed spending time with her grandchildren. Norma was a member of First Church of the Nazarene in Kankakee. Surviving are three daughters, JoAnn Lynn & Kevin Alsvig of Seneca, Janelle Leanne & Jay Comfort of Byron, MI, and Brenda Joy & Frank Thomas of Johnstown, PA; four sisters, Bea & Bill Mearns of Red Deer, Alberta, Canada, Phyllis & Elgar Newsham of Innisfail, Alberta, Canada, Doreen Broad of Edmonton, Alberta, Canada, and Dorothy Goings of Edmonton, Alberta, Canada; one brother, Ivan & Emma Weis of White Rock, British Columbia, Canada; six grandchildren, Heather (Joe), Wendy, Tyler, Brittany, Jacob, and Ashley; and several nieces and nephews. In addition to her husband, Norma is preceded in death by her parents; two sisters and one brother-in-law, Marjorie Weis, Erma & Larry Frederick; and two brothers-in-law, Dave Broad and Don Goings. Visitation will be held from 9:00 a.m. until the 12:00 Noon funeral service on Saturday, March 19, 2022 at First Church of the Nazarene in Kankakee. Cremation rites will be accorded following the services. Private family inurnment will be held at Abraham Lincoln National Cemetery in Elwood. Arrangements by Clancy-Gernon Funeral Home in Bourbonnais. “Knowing that I was obedient to HIS call, and fulfilled that to the best of my ability. Knowing that our girls did not resent their experience in a foreign land and foreign culture and that they have made their commitment to the Lord, serving Him and raising our grandchildren the same.”

The family of Norma O. Morgan created this Life Tributes page to make it easy to share your memories.