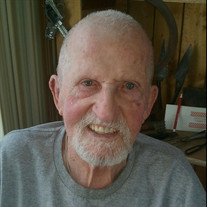 Norman R. “Dewey” DuMontelle, age 91, of Herscher passed away Saturday, January 15, 2022 at his home. He was born August 18, 1930 in Papineau, the son of Wesley & Blanche (Sizemore) DuMontelle. Dewey married Lucille Clement on October 21, 1951 in St. Anne. She preceded him in death on April 19, 2000. Dewey was a laborer. He loved camping, fishing, and traveling with his family. Dewey enjoyed working in his yard and taking care of his vehicles. Most of all, he loved spending time with his family. Dewey was a veteran of the United States Army, having served during the Korean War. He was a Sgt. 1st class in the 1st Battalion, 19th Infantry. He served as Platoon Leader from 1950-1951. Surviving are his sons, Steven (Mary) DuMontelle of Bradley and Douglas DuMontelle (Aimee Simbeck) of Herscher; five grandchildren, Kelly DuMontelle, Kristy DuMontelle, Aaron DuMontelle, Jacob DuMontelle, and Danielle DuMontelle; and nine great-grandchildren. In addition to his wife, Lucille DuMontelle, Dewey is preceded in death by his parents and one son, Michael “Duman” DuMontelle. Visitation will be held from 10 a.m. until the time of the Noon funeral service on Friday, January 21, 2022 at Clancy-Gernon-Hertz Funeral Home in Kankakee. Interment will follow at St. Anne Catholic Cemetery in St. Anne. Memorials may be made to Uplifted Care or the Illinois Veterans Home at Manteno.

The family of Norman R. "Dewey" DuMontelle created this Life Tributes page to make it easy to share your memories.