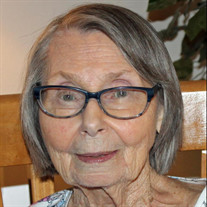 Phyllis M. Aprile, age 89, of Kankakee passed away Monday, March 7, 2022 at Citadel of Bourbonnais. She was born July 13, 1932 in Monee, the daughter of Elmer J. & Bernice (Janssen) Behrens. Phyllis married Sam Aprile on October 7, 1950 in Chicago Heights. He preceded her in death on February 11, 2013. Phyllis and her husband, Sam, established the first pizza restaurant in Kankakee in 1953, Mama’s Pizza. They owned and operated Tony’s Pizza in Bradley and The Sirloin House in Kankakee. Phyllis and her husband opened Sammy’s Pizza in Kankakee in 1961. Later in life, she worked for and retired from Kmart. Phyllis enjoyed knitting and playing word games. Most of all, she loved spending time with her grandchildren. Surviving are one son, Samuel & Denise Aprile of Kankakee; three grandchildren, Samuel (Debra) Aprile of Montgomery, Gavin (Elizabeth) Aprile of Manteno, and Veronica Aprile of Los Angeles, CA; four great-grandchildren, Dominick, Gavin, Cameron, and Josephine; two sisters, Diane Behrens-Muehring of Steger and Janice & Terry Madsen of Demotte, IN; and several nieces and nephews. In addition to her husband, Phyllis is preceded in death by her parents; one daughter, Susan Aprile; one brother, Delmar Behrens; one brother-in-law, Ken Muehring; and one nephew, Keith Muehring. Visitation will be held from 10 a.m. until the time of the 1 p.m. funeral service on Friday, March 11, 2022 at Clancy-Gernon Funeral Home in Bourbonnais. Interment will follow at All Saints Cemetery in Bourbonnais. Memorials may be made to Uplifted Care.

The family of Phyllis M. Aprile created this Life Tributes page to make it easy to share your memories.